Writing in the Age of Google 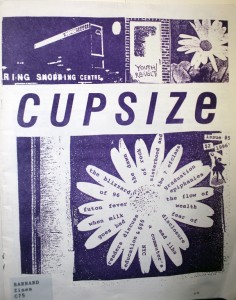 There is a snake-slithering-off-the-skin quality to being a writer—or for that matter, to being a human being; the thoughts of today are not the thoughts of tomorrow, they’re the skin to shed to stay fresh and alive. Yet now the skin collects online. Once you say it in the age of Google, you’ve said it forever. Once indexed attached to our names, our words follow us forever. Always indexable, always searchable, always viewable by parents, future grandchildren, future employers, intimate partners, and who knows who else. People still publish in offline forms that do not find their way online, but those cases are increasingly rare. Google scans books too.

Fifteen years ago, we could still say things to a limited audience of concentric circles. That’s how I started out as a writer. As a cut-and-paste, tactile zinester who wielded tape and a staple gun. When I first started writing in college, my friend Tara and I collaborated on a stapled-and-photocopied zine we called Cupsize. Our name was a play on our large busts.

Cupsize was a chance to play, and a collaboration of lightness and freedom. I never thought of what we wrote being read by a future employer. We printed about 500 copies of each zine and traded and sold them to our readers all over the world. We got in-depth letters in response, often in mail art envelopes. We wrote the zine to embrace our creative chemistry and to give ourselves total freedom to write about anything we fancied exploring in print. We wrote about everything, from the mundane to the meaningful, we said, from labor politics and bi chic to the taste of grape soda.

Making Cupsize was pure fun without the pressure of “adult” or career-driven standards. Publishing took grit, stapling, photocopying, and stamps. There was a subversive, special feeling in zine publishing.

Blogging has many of the qualities of zining; the independent voice, the direct relationship with readers, the absence of editors (usually), but the big difference is that it’s push-button easy—and accessible to publish and raed by millions. What we trade in feeling underground we gain in audience and reach. We gain in potential for impact and the ability to interact with many.

By the end of 2011, there were 109 million Tumblr and WordPress blogs alone. Everyone is empowered, and that’s a beautiful thing. Ideas, recipes, political revolutions and more flower. My own creation quirkyalone never would have taken off to the extent it did without the Internet.

Looking back now, though, zines had some advantages over blogs. Sometimes I wonder if Google’s ability to quickly index all of our content has a way of discouraging wild speech. We used to be able to write edgy things and not everyone in perpetuity could see them. Can you be edgy in 2012 without being edgy for EVERYONE? I felt very free on the smaller stage. Now, if I let Google index my content, I consent to all employers, family members, and partners reading it.

I have paused to consider publishing things online that I would not have been concerned about publishing in Cupsize. I needed an extra oomph of courage when I clicked “publish” on my recent story of chucking a coconut bottle across Whole Foods in anger (I didn’t want a future employer to think I have an anger problem) and I know most people who are not affected by celiac disease would not understand why the gluten in the coconut water enraged me. I deliberated about this interview with radical performance artist Frank Moore because I worried a future client might think I also slither naked on men in wheelchairs. Am I worrier? Yes. I am meticulous in my thinking. I think about consequences.

Recently, I said @#$@# it. I made a commitment to myself to be ever more authentic in my writing, which inevitably includes my online presence, even though Google will be collecting all the goods on me. Meaning anyone can find it now forever. It feels like a more exciting way to live so I decided to leap. Those posts felt like a return to my zining-self yet on the larger stage of the Internet.

I’m self-employed and I choose to work with people who appreciate authenticity. Most businesspeople would not have this freedom. I have a friend who works as an executive in a relatively conservative sector of technology. He told me he never publishes anything online that expresses his personal opinion or creativity. His profile needs to be clean in order to make business deals and get jobs.

What about you? Do you think twice before publishing edgy or super-authentic thoughts online associated with your name? Have you censored yourself to keep your profile “clean”? Or created a pseudonym, or password-protected a blog? Have you created “lists” on Facebook so that only certain kinds of friends see certain kinds of content or used Google+ circles to this effect? Or are you just putting it all out there and crossing your fingers, hoping for the best?