Inspiration for creating your own path: Take one step 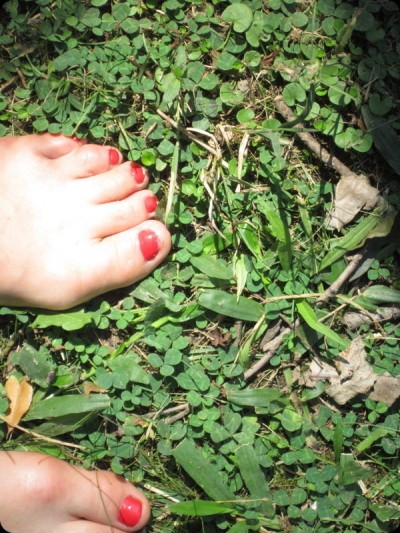 one step at a time

One of my favorite parts of traveling and living abroad is that I meet kindred spirits. People who are also interested in growth through adventure and who have taken risks to travel and try out new things for the sake of developing themselves.

I met Christine at a tango festival. I had seen her around at the milongas in Buenos Aires. We had never spoken. She seemed nice but unassuming, glasses, hair pulled back in a ponytail, kind of meek.

One night while we were riding a bus to a milonga (a place where we dance tango) she told me her story. Christine is Swiss, in her late 30s. “I worked as a nurse and then a nurse manager for 18 years but I really didn’t like it. I hated it.” She kept expecting to meet the guy, that she would buy a house with him and get married and do all that stuff in her thirties. At a certain point, she decided to just up and go; to come in Buenos Aires to dance tango.

“My friends looked at me like I was crazy when I told them I was going to quit,” she told me. “What are you going to do next? You need to know what you’re going to do next before you quit.”

“It’s done,” she told them. “I already quit.” She had this great impish smile on her face when she told me that. This woman is not meek, I realized.

“It was really hard to make that choice,” she said, “because I was surrounded by people who thought I was nuts.” The Swiss are fanatical about planning, she said. (Just like Americans.)

Christine told me later it was so nice to meet me because she could see that I was also following this path and it made me her feel less alone. Through our lived experience, we have come to share a point of view.

The way Christine is living, and the way I’m living, is evidence that you don’t have the have the whole plan in mind for your life. You can just take one step toward what you want and figure it out as you go along.

You could make excel spreadsheets forever planning your budget, the ideal scenario, where you will find your partner,and so on. But often you just need to take a step toward something that makes you feel alive.

In our case, that impulse was coming to Buenos Aires to dance tango. That could be anything for you. It doesn’t necessarily mean traveling or leaving home. You just have to take a step, and then keep taking another step, and another one, and figure out more as you go along. That’s been my experience with pretty much everything I have done: my magazine To-Do List, my books, my travels, the web company I co-founded, and becoming a coach. I never had a grand plan in mind, I just took one step after the next, and I could intuitively feel that the energy would be in the steps I was excited–if also scared–to take.

As comforting and secure as it might be to have a plan, I have found that taking an intuitive, passion-filled step is more important. I’ve watched the same thing happen with my coaching clients. They come to me burned out by jobs they no longer wanted. They just have to tune into something that actually gives them passion and excitement. They take one step, and then another. And then another. A cascade of unexpected things happen.

Christine will go back tomorrow to Switzerland soon after her three and a half months in Buenos Aires. She is feeling okay with it. She extended her time here by two weeks and now she feels ready to go, to see what happens when she integrates what she has learned here into life at home. She says she will look for work outside the hospital since she didn’t like working in a hospital. She may take a Traditional Chinese Medicine course. “I want to mix it up,” she says. She hopes to find her husband upon arrival. She laughed at the idea of showing up back in Switzerland and saying, “I’m ready. Are you?”

Maybe that is the way. When you get very clear and are turned on you’re more likely to attract what you want.

I’m excited to find out what comes next for her.

Bottom line advice
Take the one step toward whatever makes you bright. If you are contemplating taking a step, let me know what it is in the comments.

P.S. I am absolutely loving the group in the first session of GetQuirky. I think I may change the name to Go Forth and GetQuirky, that’s what we all say to each other when we end one of our weekly calls. We’re having so much fun and going deep at the same time, exploring what it means to love all of who we are, “flaws” and quirks and all. The next session will be in July. If you want to become more radiant by accepting the quirkyness of yourself and others, sign up for the early information list here.