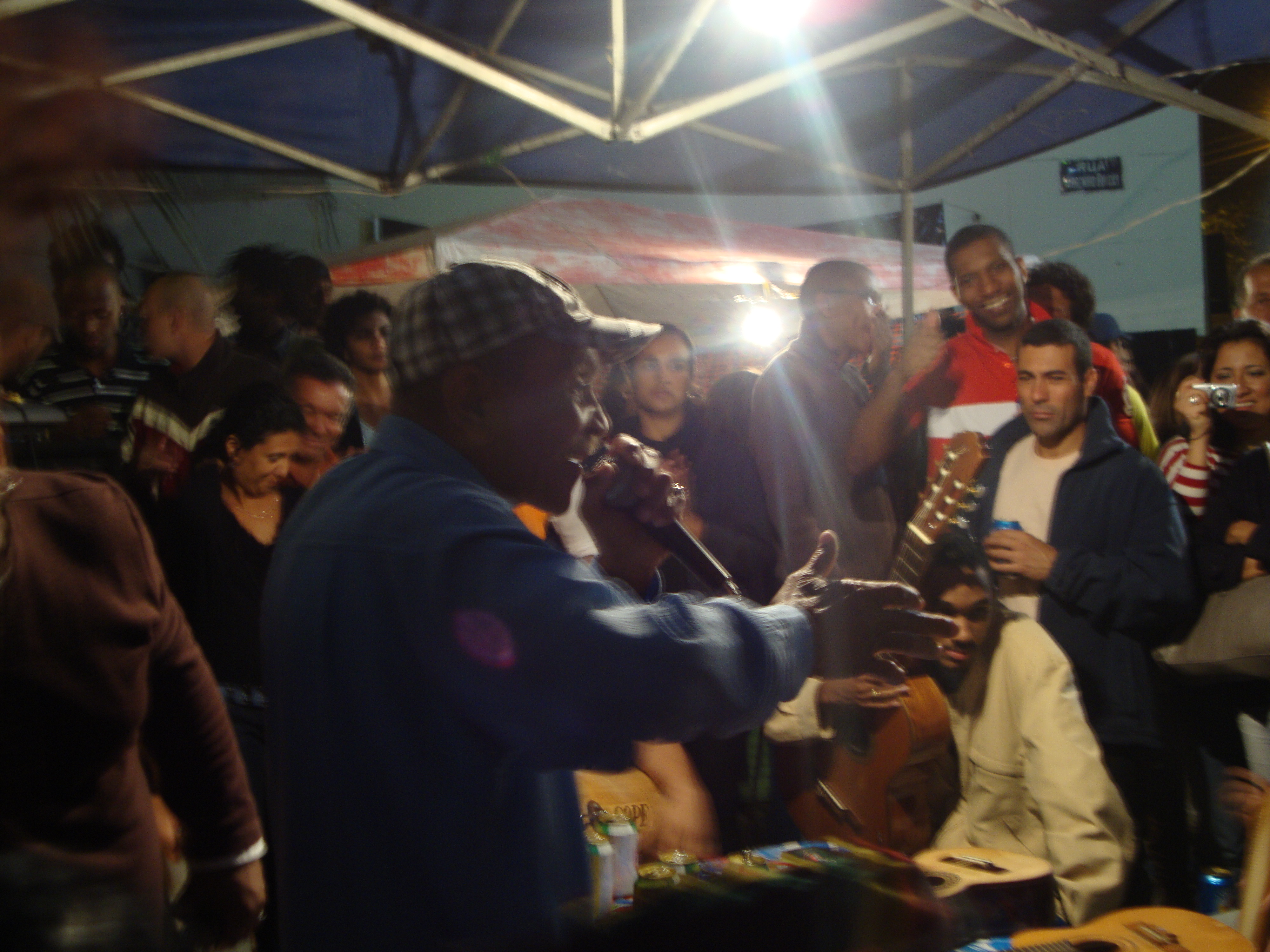 A Malandro, live and in the flesh!

Cariocas love to talk, and one thing they love to talk about, until no end, is the malandro. A malandro a wily character who gets by without a regular job, enjoying life to the fullest. There are two sides to the malandro: the bon vivant (traditionally a man who plays music in a samba school may be poor but rich in his enjoyment of life). And then there’s the malandro who takes advantage of others. Cariocas (Rio-born residents) are more likely to talk about the dark side of malandragem, as this can be a friendly but suspicious place. But it’s a complicated word, as many Brazilian words are. Google translator has given me different translations–as a noun, “rascal” and as an adjective “mischievous.”

In my first blog post on malandros I promised to be on the lookout for an official specimen to take a photo. Last Monday night Rom‚àö¬£ from yoga class took me to an excellent Monday night samba at Pedra do Sal, a historically important square below a sloping hill near where samba was born.

Always the urban anthropologists, Rom‚àö¬£ and I spotted people who exemplified both the light and dark sides of the malandro/a!

The singer, who must have been in his sixties or seventies, exemplified the old-school malandro. He wasn’t wearing all white. (Another friend Roberto had told me about the historical malandro of samba schools, clad in a dapper white suit and hat.) But this man definitely exemplified the samba bon vivant.

We decided that the woman who served us our street food (bean and pea soups) exemplified the dark side of malandragem. Each soup cost R$5 and in our confusion we each gave her R$10. She didn’t offer change until we asked for it 20 minutes later. Wily malandra! I was secretly happy that this time malandra had an “a” at the end, as there seems to be some sexism inherent in the malandro. Oh no, women can be scoundrels too.

Side note: be wary of one place where sneaky malandro tax drivers roam. The rodoviaria! (Bus station!) When I was coming back from Sao Paolo, I took a cab from the bus station as you really have to do in Rio. The taxi driver I chose warned me to never take a fake taxi, a car painted yellow. He then proceeded to charge me an additional $R8 on top of a R$20 fare. Taxi drivers who have not updated the technology of their meters carry a table of prices with them that indicates how much the fare should be increased. I knew a 40% addition was outrageous because usually the increase is only two or three reais. I was annoyed that he thought he could get away with it but proud of myself for fighting back and winning in Portuguese.