Here are some very random clips from the Quirkyalone Launch event last Sunday, May 17, at the Brasilis Hostel. The event was part of Santa Teresa’s Literary Festival FLIST, modeled on Paraty’s Festival FLIP.

The Brazilian version of Quirkyalone, SoSingular, actually came out 2006. But my arrival in Rio coincided so perfectly with Santa Teresa’s new literary Festival, FLIST, Sarah, the manager at Brasilis Hostel suggested a launch party and who would I be to refuse?

The event received got a fair amount of press in The Rio Times, O Dia, and
Yahoo Brasil. Doing a photo shoot in Copacabana for O Dia was a unique thrill. I had actually come straight from the beach, Praia Vermelha at Pao de Acucar. Luckily a friend let me take a shower and his mother had a hair dryer–what a travel luxury. 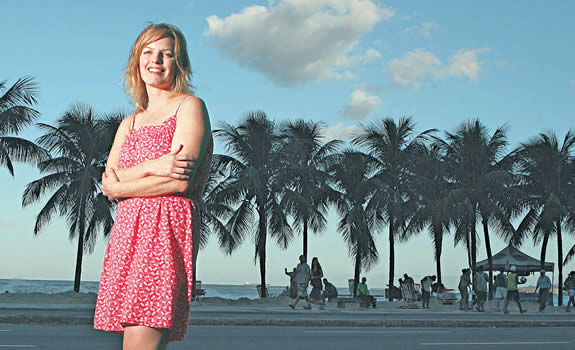 a photo shoot for O Dia in Copacabana

This was the first time I’ve ever done a quirkyalone event in another country or another language. I didn’t know whether most of the people would be English speakers or Portuguese speakers (The Rio Times is aimed at English speakers), so I just waited until the crowd assembled and gauged which language to use. Just thinking about that moment in time makes me nervous again! Everyone spoke Portuguese and not everyone spoke English so I dove in.

Some reflections on the event:

* I think quirkyalone might be more fun to say than sosingular. Some of the humor gets lost in translation and the conversation becomes a little more serious. Quirky is a really unique word with this light and charming connotation (a sense of difference that’s not trying too hard and isn’t threatening to others), which does not have equivalents in other languages–I’ve never heard one in the languages I know: French, Spanish, and Portuguese. If you know of a quirky equivalent I would love to hear it. Incidentally, the other foreign versions in Danish and German retain “quirkyalone” as the concept and don’t attempt translation.

* My driving question entering the event was, How does the quirkyalone experience differ in Brasil? I thought that because being alone is so much more foreign here (primarily because of the centrality of family, the sense of “we” and the collective rather than the “I” which is so strong in the States) the experience of being quirkyalone might sound different. I guess it’s a question that I have about quirkyaloneness is all cultures–say India or China. But listening to people talk, the experience sounded rather universal. People talked about enjoying traveling alone, wanting to be in a relationship but not wanting to be in one for the sake of one, and about the meanings of solitude, feeling complete in yourself, and about freedom–liberdade.