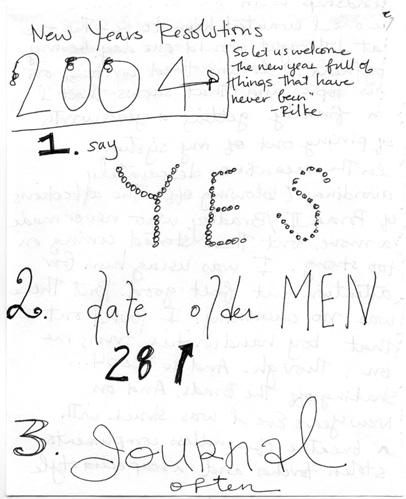 I’ve always been like a Boy Scout. Their motto is: “Be prepared” and I like to think ahead too.

January 1 is still a month away but I would like to share a little bit about New Year’s Resolutions, a list occasion that has become fraught with anxiety and self-loathing. I don’t think it has to be that way.

We have a bizarre relationship with New Year’s resolutions. In late December we’re bombarded with tips for thinking big, so we can become the ideal person we want to be. On the other hand, there’s a growing sense of fatalism around resolutions—that if a commitment is made at New Year’s, it won’t work, by definition. Forty to 50 percent of Americans make annual promises to themselves. The other 50 percent boast they have given up resolutions. They’re not going to spoil a holiday dedicated to debauchery with the quest for self-improvement.

I’ve always been fascinated by resolutions because our relationship to them is so complex and contradictory. I have a whole chapter dedicated to New Year’s Resolutions in To-Do List.

Why is it so hard to keep a resolution? Probably because a yearlong promise just doesn’t make sense. Change happens in fits and spurts. The most effective to-do lists are full of items broken down into their most minute parts, extremely achievable goals (walked up a hill today as a first step, yeeha! . . . now I can cheerlead for myself by crossing that off). I always thought monthly resolutions might be a better approach, if you can stand the constant work and thought of self-improvement.

I do think that there’s something very special about New Year’s lists, though, as a time of collective listmaking introspection. It’s the only time of year when we all make lists and talk about them together. That can be fun, if you don’t allow yourself to be burdened by the pressure of fully living up to them and instead use the holiday as an excuse to find out how and what other people resolve and use their ideas as inspiration for your own. I am by now notorious for buzzing around New Year’s parties asking people about their resolutions and giving them an impromptu life coaching session to help them create at least one or two if they don’t have any. Come on, I will say, there must be some area of your life where you’d like to explore something differently: friendship, work, love, art, travel, exercise?

Here are some ways that I think resolutions can be fun and less full of self-flagellation. Add your own in the comments.

‚Äö√Ñ¬¢ Sneak a peek at other people’s lists. First and foremost. I think it’s really fun to find out what other people are resolving to do. You can easily do that on todolistblog.com. I will publish five handwritten resolution lists every Monday in the month of January.

‚Äö√Ñ¬¢ Throw a List Party. Instead of making your resolutions alone, ask your friends and family to come over and write lists together. You may even be able to make resolutions for each other and help each other achieve them.

‚Äö√Ñ¬¢ Even better, make your list party visual and make it a collage party. Invite everyone to bring over stacks of old magazines. Cut out photos from magazines of all the things you want to manifest in your life. Hang your poster where you will see it often.

‚Äö√Ñ¬¢ Treat New Year’s as a true list holiday and go on a list spree. Light a candle, sit in a comfortable chair, crack open your journal, and write list after list. Lists are not just about self-improvement, they’re a chance to take your mental pulse, to listen to the voices in your head. Make at least five lists: Accomplishments in the past year, lessons learned, things to be grateful for, the top ten moments of the past year, things that interest me.

‚Äö√Ñ¬¢ Give yourself credit for partial success. If your resolution was to read a book a week and you keep it up for two months, that’s eight books. Same goes with weight loss, exercise, and saving money. Tiny steps!

‚Äö√Ñ¬¢ Save your New Year’s lists every year in a special box; every year you can read them. Just don’t be depressed if you don’t happen to cross everything off. Think of your lists as more of a personal history than just an organizational tool. Our lists can be a unique window into who we are and what we want. It’s truly wacky to read your meta to-do lists from ten years ago and see how similar (or perhaps different) they are.