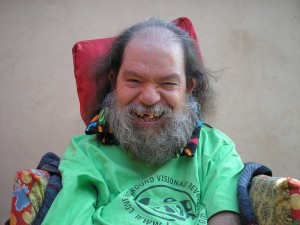 My friend Jenny invited me; in an email and in the car on the way there, she warned me, “We can walk out early. I’m okay with that.” I didn’t read any of the links she sent in advance because I decided, “I want to do this blind.” Come what may. My social life in the Bay Area is a bit predictable. I am ready to be shocked and uncomfortable. And Jenny and I haven’t gotten to do enough fun stuff together lately.

The event was called “Uncomfortable Zones of Fun.” This monthly event has been going on for three years and it’s hosted by the legendary performance artist Frank Moore and his entourage of supporters over at the Temescal Arts Center in Oakland. Moore is most famous for being one of the NEA-funded artists targeted by Jesse Helms in the early 90s for making “obscene” art. Jenny and I walked in ten minutes early and we were the only ones there. I whispered, “Do you think we will be the only ones?” It would be higher stakes to walk out if we were the whole audience.

Slowly seven more people trickled in to sit with us on the padded floor. They were a motley bunch: a young guy who had been traveling North America for a year, an articulate young research scientist, a mother-daughter pair, and a guy wearing a San Francisco Drug Users Union t-shirt. Frank Moore sat up front assisted by a woman who seemed to be a longtime collaborator and assistant. She interpreted and spoke for him. Frank was born with cerebral palsy and he can’t walk or talk. He communicates with the audience using a laser-pointer perched on a headband around his head, and a board of letters, numbers, and commonly-used words.

The performance consisted mainly of him asking questions of the audience, putting them on the spot and making them uncomfortable. The questions were not so crazy, “What attracted you to come here?” “What do you do for fun?” “What do you do?” Jenny had whispered to me, “He is well-known for asking people to take off their clothes or to undress others.” He didn’t ask me to do either. My answer would be a definite no, especially because they film the whole thing for a Berkeley public access show.

The theory: By making ourselves uncomfortable, we expand our range of what we are capable of doing. Making ourselves uncomfortable makes us more alive. I’m a big believer that life begins outside of our comfort zone. I also believe in the perfect stretch–a bit outside the comfort zone, but not so much that it blows you out. I was amazed by how “normal” many of the audience members were and how willing they were to play. Only one (the guy in the Drug Users Union t-shirt) was game to take off his clothes, but they were willing to create improv situations on the spot and to play percussion instruments. Upon request, Jenny and I each read a chapter each of two of his books. I read a chapter that exhorted performance artists to not censor themselves.

My favorite part was how Moore challenged me with his appearance. The man is 65 and had huge gob of saliva clumped together and cascading through his beard. He quivered as he tried to communicate, and I could see, when I got up to sit next to him to read from his book, that his laser pointing never really was stable enough to rest on letters. I noticed how grossed out I felt by his appearance, and how he challenged my beliefs that only “attractive” human beings should be on stage. I felt uncomfortable and ashamed to judge. His delight in life was palpable, despite age, despite handicaps. The man has a harem of lovers and he does nothing if it is not fun. He is prolifically creative. He described his writing as “improv with a computer.” (I want my writing to feel like improv too. Something unexpected, words that cannot be predicted and are not agonized over.) He questions whether his cerebal palsy is a “handicap.” I love people who only do fun. Every so often I meet one of these characters and they remind me of what life is about. I would love to do a book of profiles about people who only do fun.

Though most would see Moore as deeply disabled he has created his own unique, deeply creative and bizarre life on his own terms and created his own version of freedom. I am in the midst of struggling with my own health limitations since being diagnosed with celiac disease and taking on a strict gluten-free diet that makes social situations and travel complicated. How can I even complain for a second when I look at someone like Moore who goes for life with such insane zest even though he has never been able to speak normally. I worry when my pinkie hurts, Will I be able to type and write? This man has somehow managed to write and create art despite the fact that he cannot control his limbs. We are capable of anything when we are resourceful.

With Frank as my odd inspiration, I undertake a new challenge for myself: living out loud, writing at least one blog post a day that will be like “improv with my computer.” Let’s see how this goes.

Jenny and I did walk out early, after most of the rest of the audience. I went to the bathroom and was surprised to walk out and find two of his harem slithering naked on top of him in his wheelchair. They were engaged in non-orgasmic eroplay designed to melt boundaries between human beings.

We decided it was time to go get a drink. On the way out, we met a guy who was picking up a pizza next door, heard the music, and decided to check out what was going on. It was so much fun summing up the night for a curious passerby.