How is a male strip show different? 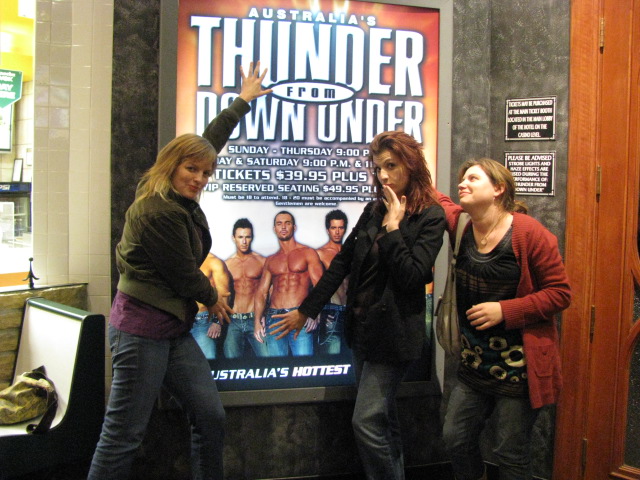 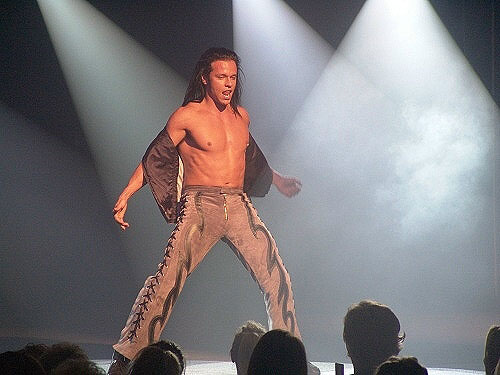 “You’re going to be surrounded by bachelorette parties,” my friend A told me, as if that would somehow dissuade me. “That’s OK,” I said. “Why do we have to wait until someone gets married to objectify men? We’re bachelorettes. We can have our own party.” A’s friend M gave me a high-five kind of look. She too wanted to go see Australia’s hottest export, The Thunder From Down Under (Las Vegas’ “top-rated male revue”).

As soon as I arrived in Las Vegas to visit A., and I saw the ad for The Thunder from Down Under in the tram at the airport, I knew that I wanted–needed–to see the show. It would make the weekend. Las Vegas is so saturated with images of objectified nubile women. It was hard to concentrate on conversation at dinner at times with images of writing women in the distance on television screens. From a quirkyalone perspective, I wanted to know what a male revue show would be like, with the genders reversed.

Here’s what you might want to know, off the bat. The men did not get naked. I kind of thought they were going to–the Aussie emcee told us there would be nudity!–but we did see them in thongs with weirdo pouches holding them in the front. They did flash us their buttocks at times, and I must admit, I slapped a long-haired Fabio-like fellow’s bum when he came to gyrate in front of our table. Were they sexy? In a cheesy kind of way. At first, their dancing style seemed a bit amateurish. Their moves almost reminded me of a step aerobics class. I was like, Gee, we paid $60 for this! I do leglifts like that every Saturday morning. But it got better. They did a Firefighter fantasy, the classic YMCA dance, and all kinds of silly dancing to “It’s getting hot in here. . . ”

The question is, how is a male strip show different? Men go to strip clubs to see topless–or entirely naked–women all the time. Women apparently go only on special occasions, for girl bonding, when a friend is saying the long goodbye to touching other men. You might even say that as non-marrying patrons, we were marginalized. They only dragged the girls with tiaras up on stage to bump and grind with them.

Overall, I think the main difference between a male and female revue has to be the camp factor. Mostly, I found myself laughing, grinning ear to ear. How could it be anything but funny to watch a guy pulsate his buttocks muscles to the tune of a pop song? The women screamed, dancing. The performers seemed to be enjoying themselves. They slapped each other five after one of them did a solo. There was a light-heartedness and camaraderie that I can’t imagine seeing reproduced in a female show. . . women are constantly on display, constantly performing, there’s nothing unexpected or funny about it. To watch men perform for women felt unique. It was a lot of money to spend, but it underscored for me that women do have economic power now to do whatever they want–to be the quirkyslut if they want to! It’s also refreshing to watch men play out sexual fantasies. It fuels the imagination. We women are used to seeing only women play the come-hither role.