A Battle of the Sexes on the Salsa Dance Floor 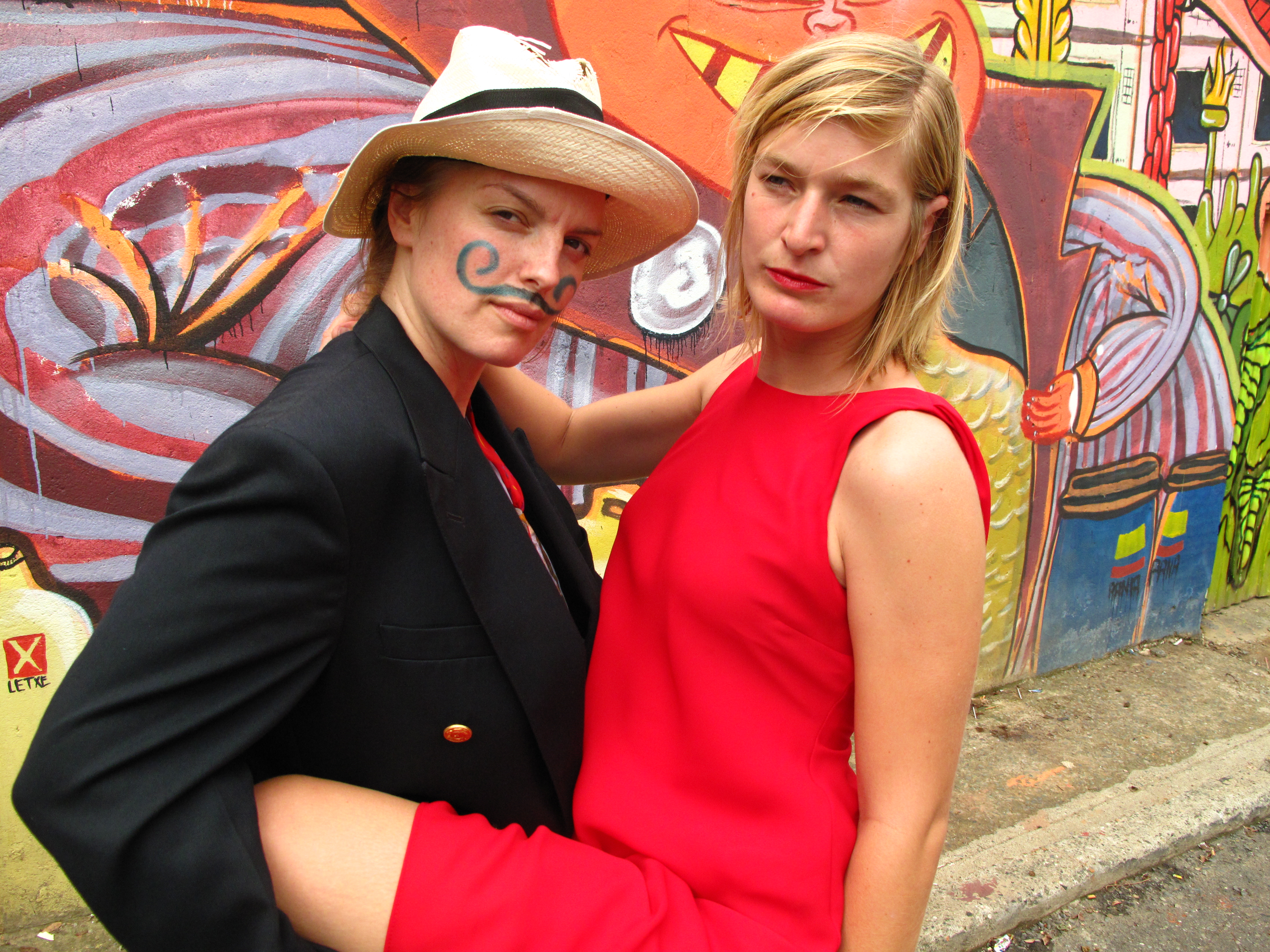 Can't we just all get along in a salsa class?

This past week I went to a free dance class offered by the Cali’s Mundial (Worldwide) Salsa Festival. The class was actually bugaloo and it was a lot of fast-stepping fun. At a certain moment the teacher told us we would not do “pareja” (couples) work. A stocky, red-haired Irish-looking guy and I drifted toward each other. The first thing he says to me is “Relax.” I said in response, “I’m already relaxed. Are you relaxed?” He says, “Maybe you want to dance with someone else.” Then he went off to find a new partner. Why did he need to tell me to relax before saying hello? We were about to practice a dance combination, not compete on Dancing With the Stars.

Salsa dancing in Cali, Colombia, the worldwide salsa capital, has been a magical experience. I’ve gone out dancing to about a dozen clubs and there are still dozens more to explore. I’ve taken classes at a phenomenal school Swing Latino and with fantastic teachers. But immersing myself in the salsa culture of Cali, Colombia, has also immersed me in the machismo of Colombian culture.

It’s been a full-on battle of the sexes with both Colombian men and other travelers that I haven’t felt since college.

I am ordinarily quick to avoid conflict but I have morphed into the lady with a short fuse. Give me some attitude and I give it right back.

Don’t get me wrong. I don’t have a problem with following. Leading is harder. The leader (who could be a man or a woman) has to think about what comes next. I like the sense of abandon and living the moment with the music, not having to consciously plan. But these are roles that a man or woman could play. A woman can lead, a man can follow, and the best dancers know how to do both.

But the idea that men are the leaders permeates the classes in a way that really pumps up feelings of “natural superiority” for men.

Too many men get the idea that they are our “salsa daddies”—that they know more than they already do. The paternalistic attitude trickles down in our classes. The “salsa daddies” tell us we don’t need to look at the teacher, we only need to follow their lead. They criticize their female partner when actually they don’t have any clue what they are doing themselves. Like the cliche of men who won’t stop a car to ask for directions, they don’t want to ask the teacher for a demonstration when they are not getting the steps themselves. Of course not all men behave this way. The coolest men resist the machismo pull to think they know better than their female partners, and those are the ones I enjoy learning with because learning feels more like a team effort.

It’s psychologically intense to be paired with a stranger in a relatively close embrace and to have to work together. If I sound as if I am sensitive to the male psychology of salsa dancing, I can be. But if anything, the last week made me pissed off.

Here’s a very typical example: I was at Manicerro, a Caleno-style dance school, doing partner work. My partner and I were learning a combination. He wasn’t getting it and it was impossible to do the turn. He called over the female director of the school because according to him, I needed help. She danced the man’s part, and the combination went off smoothly. She smiled and said, “I think she knows it. I couldn’t resist saying, “Now maybe we can focus on you and your problems.” The female director gave me a knowing smile.

Sometimes I feel like men feel responsible to correct their female partners on everything once they step into a salsa class, including how to speak or tie their shoes. The day before, I took a semi-private class with five other foreigners at Swing Latino. My partner was also American. I said “Listo” as we were about to begin. “Listo” means two things in Colombian Spanish: “ready” or “OK.” I was using it to say, “OK, let’s go.” My partner responds, “Lista. It’s lista,” assuming I was saying “ready.” Was this southern Californian guy really correcting my Spanish? I tell him, “listo” doesn’t follow the gender of the speaker if I am saying “OK.” But I did feel “lista” to kick his butt.

This past week I was at Cali’s phenomenal Mundial (worldwide) Salsa Festival. In addition to performances, competitions, and concerts by Yuri Buenaventura and other big names in salsa music, there are 20 free dance workshops open to the public. The workshops are on everything from Salsa Calena to Fusion of Salsa and Tango to Salsa en Linea (otherwise known as LA Style). The classes are large and there is only one teacher per class.

During the free workshops at salsa festival I really started to really feel the imbalance of male teachers leading the class with microphones and silent female partners by their side.

I attended six workshops out of twenty, and all of them had men teachers. I’ve had plenty of male and female dance teachers, and it’s always been just fine to learn from a man. But consistently seeing men speak and women silent as their partners started to get on my nerves. What about the female point of view in a partner dance? My friend Griet showed me the way she dances at times and says she naturally drifts toward the male style of the basic step in salsa, with more vigorous footwork and armwork, because the only examples we see demonstrated are from male teachers with the occasional female partner.

One teacher of Caleno-style salsa, “El Mulato” Luis Eduardo Hernandez, told us that men hold all the responsibility for the dance. He joked that his partner needed to dance on her toes–the Caleno style–so that she could be “manejado” (driven) by any man. A titter of outraged laughter went through the crowd.

Most insane: the workshops “Estilo para Mujeres” (Style for Women) was taught by a guy who couldn’t have been older than 20. He began the class by telling us that he has nothing against gay people, but he isn’t gay. What can I say, but WTF?

I saw a young woman dancing beautifully. I asked her why she didn’t go upfront so we would have a female example. She smiled and said that a man or woman could demonstrate. That may be true. But I also wanted to hear about Style for Women from a woman.

I talked with a female organizer from the Secretary of Culture who is organizing Cali’s salsa festival. She says she and her female colleagues have discussed the issue themselves and wish there were more female teachers leading workshops. Why they don’t invite women teachers then? When I expressed my pissed-off-ness a female Colombian friend looked at me like I was a little crazy, overzealous.

The imbalance in teachers is not such hard problem to solve. I vented to my uber-sweet Colombian friend William who takes salsa and dance classes himself. He told me he learns from women all all the time. His teachers are both women, and he pulled a card out of his wallet to show me his salsa teachers–they are a couple and the woman and man teach equally. The ideal situation, according to him, is a group class with a man and a woman teacher. That wouldn’t be so hard for the Salsa Festival to pull off. Just give a microphone to the woman demonstrating so both people have a voice. 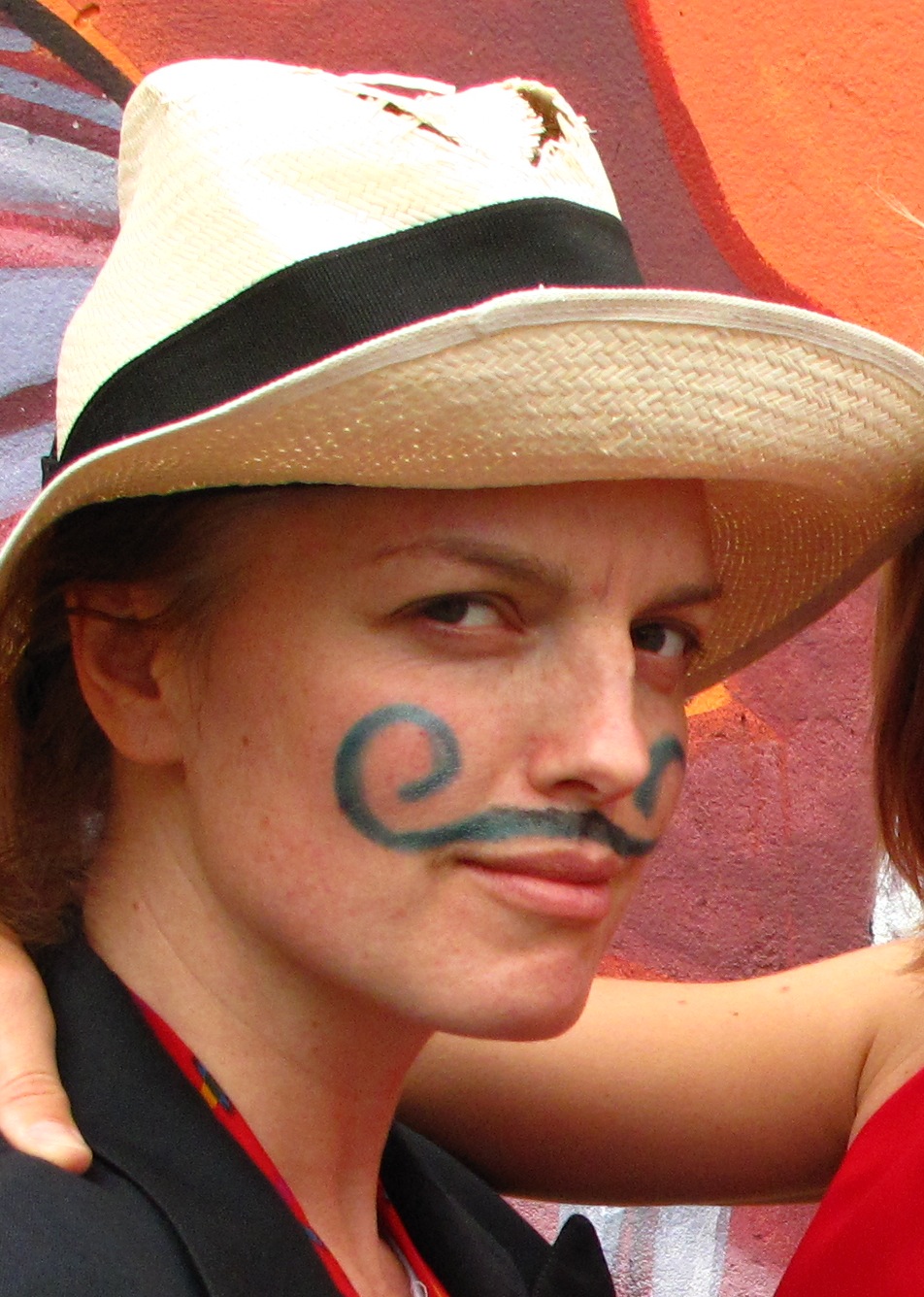 It’s hard to change the behavior of arrogant boys who think they already know everything. How do you teach humility? But as a woman, sometimes you really have to stop and insist, let’s see what the teacher has to say. Or if he criticizes you in an unhelpful way, just say, can you stretch your feet a little more because right now I think you walk like a duck. Or paint a mustache on your face to tell an overly helpful dance partner to step off.

Thanks to David Reina for wardrobe assistance, Wouter De Maeseneire for serving as impromptu photographer, and Griet Van Herck for the styling genius, modeling, and being my fellow Reina (queen) on the dance floor. More of our salsa photos to be posted soon as soon as I figure out the WordPress galleries feature.