How Brazil Resurrected My Spirit

I’ve been writing to you about Argentina a lot lately because I spent the last eight months in Buenos Aires as a digital nomad (working) living my dream of immersing myself in tango. I loved those eight months!

I’ll be back in Oakland, California in a few days.

Brazil vs. Argentina
Brazil and Argentina are rivals. Argentines (well, let’s say Buenos Aires residents, Portenos) are moody and known for complaint, psychoanalysis, tango, beautiful architecture and being the “Paris of the South.” Complicated is the word for Buenos Aires. In a delicious way. They’re about the head.

Brazil, by contrast, is about the body. If complicated is the word for Argentina, let’s say wild and charismatic for Brazil. Brazilians, in general, and in my experience, are light and funny and are always up to embrace life. They know how to live. Every time I go to Brazil, I get an attitude adjustment. The country is well known for cosmetic surgery, but for me, Brazil gives me a spiritual adjustment every time I visit. Ah yes, this is what life is about. Enjoying life and enjoying having a body. Without shame.

Brazil resurrected my spirit.
I first came to visit Brazil for three magical weeks in 2008—my first big trip after many years of not traveling internationally.

On the way home from that first trip, I was standing in the food court of the Rio airport. I got a rush, a sensation, that I needed to come back to live in Rio. My body gave me a sign. In 2010 I made good on that sign and spent 6 months in Brazil, traveling and living in Rio.

My life changed so much when I discovered Brazil–and through the decision to travel alone. I’m at work on a book now–a memoir–about how my travels through Brazil, Colombia and Argentina gave me a new way to live my life–through pleasure and the body. I’m writing it for every woman and man who feels their disembodied spirit wither away in front of the computer screen. I’m especially writing it for single women.

Brazil resurrected my spirit. At that time, I was burnt-out, in a sexual and spiritual malaise, cynical, without any desire to do much of anything. Brazil was the spark plug that brought me back to life. I owe a huge debt of gratitude to Brazil for reviving me, and I have tremendous admiration for the Brazilian people’s spirit.

Now Brazilians have woken up!
Just as Brazil woke me up from my personal slumber, the Brazilian people are now waking up in a massive protest to stand up for themselves. Brazil is not known for protest and they have not protested in a massive way since the early 90s. My Brazilians friends keep using the words “we’re waking up!” on Facebook.

Just like their brothers and sisters in Turkey, the Brazilians are saying enough.

The immediate spark was a relatively small bus fare increase in Rio (but buses were already very expensive), and now protests are happening all over the country because people are fed up with watching the government pour millions of oil money into stadiums for the World Cup and the Olympics while people’s absolute basic needs are ignored. This story explains why middle- and working-class Brazilians are suddenly taking to the streets.

“Protestors are also gathering in front of the new sports stadiums built for the 2014 World Cup and 2016 Olympic games, which will be held in cities across the country. Brazilians want the basic needs met like reasonable healthcare, education and a government free of corruption — not $600M soccer stadiums that won’t be used after these events are over. . . Nurses are paid $250USD per month, which is even less than the menial $350USD per month minimum wage. People are literally dying while waiting to be seen, all while the government presides over one of the largest and most recently discovered oil fields in the world.”

Brazil has become incredibly expensive. Sao Paolo and Rio are ranked as the 10th and 12th most expensive cities in the world now. By contrast, New York City is 32nd. And yet, the minimum wage in Brazil is $350 a month! Many people make minimum wage.

My friends in Rio have been involved with these protests.

In December 2012, the last time I visited, two of my closest Brazilian friends invited me to join them to take a walk up to Morro da Providencia, the oldest favela in Rio. A favela is an autonomous community on a hill where very low-income people have created homes for many years. This particular favela has existed for 115 years. A theater group was stanging a performance to protest the planned Gestapo-like destruction of homes to make way for a tourist overlook. 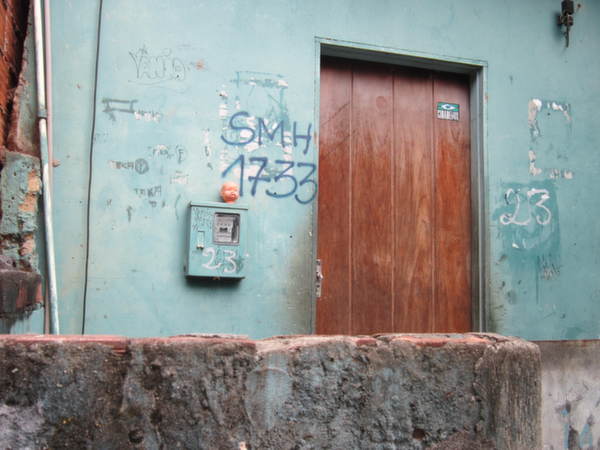 in the favela Morro da Providencia, the government has spray-painted numbers on homes to indicate they will be demolished, but had not told the residents when

We hiked up the cobblestoned streets and chatted with the favela’s residents along the way, confirming that numbers spray-painted on people’s houses meant these houses were slotted for demolition. They had not even been informed of when their homes will be destroyed. They were living in a limbo zone waiting for the demolition. 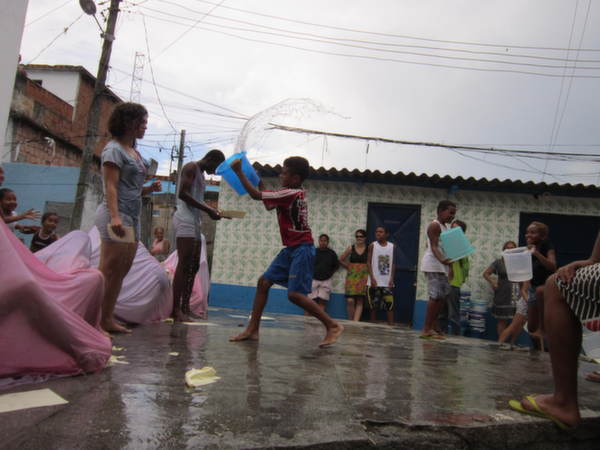 The theater performance consisted of a theater troupe reading a 17th century text of a Portuguese colonist aimed at indigenous people. The text was partially in Latin and my Brazilian friends didn’t understand most of the words, but the feeling of anger was unmistakable. Children from the favela were invited to splash water on the “colonists”—quite hard!—while they were reciting the text. The kids seemed to enjoy their role.

My friends had also been protesting the destruction of the Museo de Indios (Museum of Indians) which was being destroyed to make way for a parking lot for the World Cup! Talk about adding insult to injury, first the colonizers wiped out the Indian population, then they wanted to get rid of the museum commemorating them to make a parking lot for an ephemeral event!

You will be hearing more about Brazil from me in the future, especially in my new book. Brazil is very quirky! Here is a post I wrote about Brazil’s quirky soul and my favorite quirky places in Brazil.

They are definitely our brothers and sisters in the quirky revolution and deserve our support. You can help by sharing the deservedly #changebrazil viral video and of course this post. 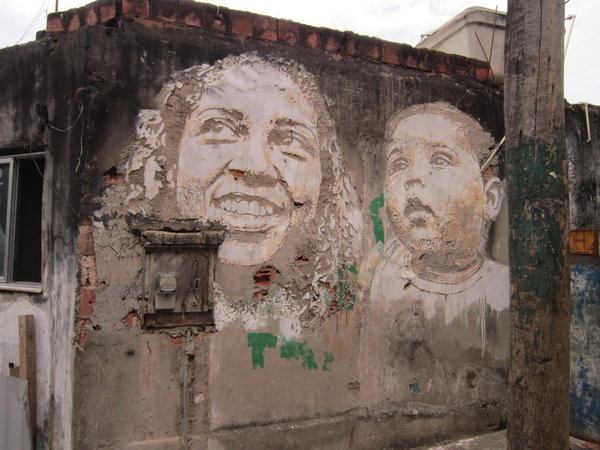 in morro da providencia, the favela slated for destruction, faces carved into a wall by the portuguese street artist Alexandre Farto 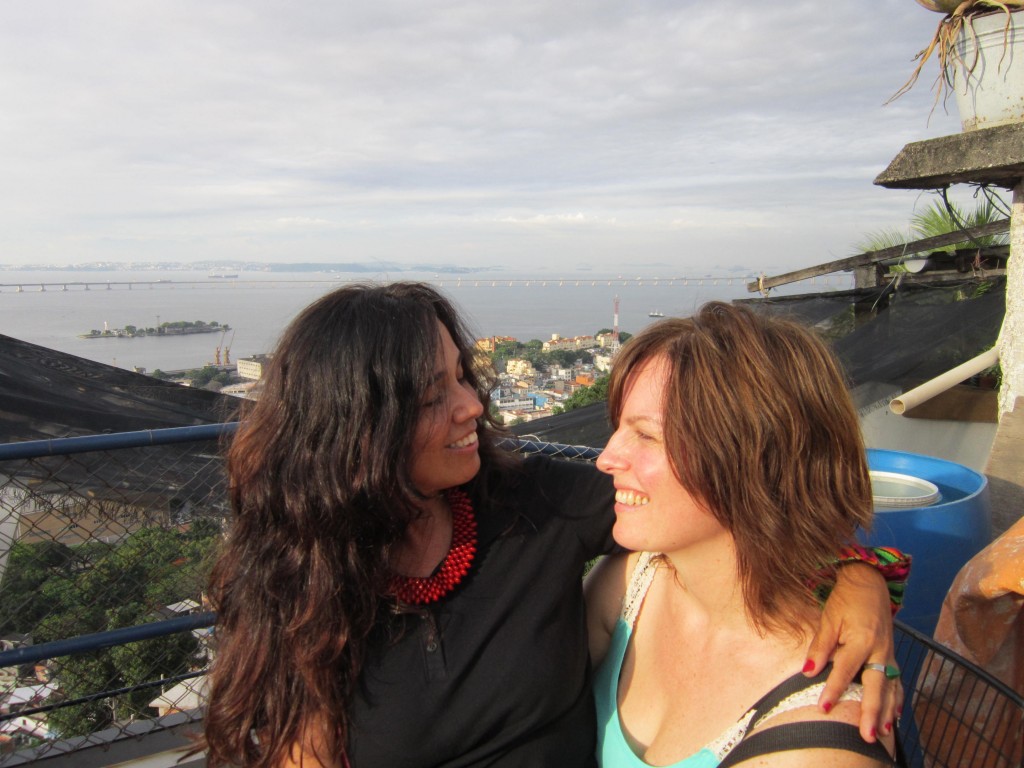 me and my friend iracema, this is the spot at the top of the hill which the city wants to turn into a tourist overlook (and is willing to displace hundreds of families to do)

P.S. The next session of my class GetQuirky is enrolling soon–if you are not traveling this summer consider it your quirkycation! Come over to this page to sign up for the early notification list and be eligible for an early-bird discount. Taking GetQuirky is a great way to get to know your quirky self and what you want in life, and to travel without leaving home!