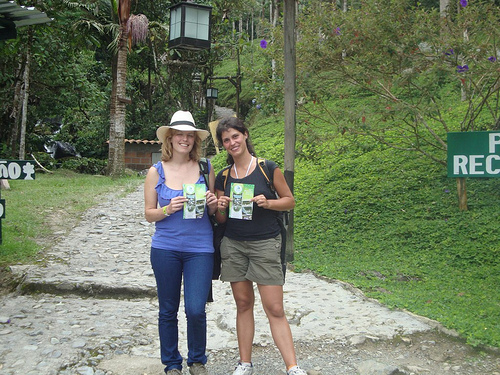 Susana and I arrive at the Santa Rosa hot springs after three long bus rides and an interesting conversation about Americans!

One of the best things about traveling has been the ability to see my own country from a distance. Not only have I gotten the chance to see the U.S. more objectively (as the center of the world that it definitively is not), I’ve also absorbed impressions from all the people I’ve met from all over the world.

So what do people say about Americans? I love listening to foreigners’ perceptions of Americans, even when the perceptions are quite negative, because it’s not what you would expect. None of this is actually “true” of course—but they’re all fascinating points of view.

Americans are so practical!: The idea that Americans are very practical came up all the time. Once, I was asking my tango teacher Carlos in Cali whether he thought that an investment of two more weeks of private tango classes would make a big difference, and he said, all you Americans ask that question or questions like them. And his Colombian students, according to him, just live day to day, just grabbing whatever opportunity (or class) they can at the moment. This contrast came up all the time. For example, I was talking with my couchsurfing host Betao in Sao Paolo, and he claimed that Brazilians are happier than North Americans because they accept uncertainty and live in the present moment. More on that in this blog post “Brazilian Happiness Part Two.”

Once, in Rio, I was sitting around and chatting with my friends Roma and Iracema as Iracema checked her Facebook page (an activity so similar to a scene in San Francisco). Iracema is a whimsical philosophy teacher who did her doctoral thesis on Nietzsche and always found a way to bring Nietzcsche into conversation in a way that totally made sense. Iracema had offered to give a class on “Love Total” in a Facebook status update. “Love Total” would be an advanced seminar on self-love, friendship, romantic love, menage a trois, and more. Was she serious? Was it a joke? Something in between. She read the comments from people who said they wanted to take her course. I asked how many friends she had and how many people had indicated interest, and calculated a 15% response rate.

Roma and Iracema looked at me like I had performed calculus, and said, Wow, you Americans are so practical! You’re all about numbers! Having sent out countless email marketing campaigns for my websites, calculating a response rate seemed elementary to me. But somehow, for them, this communicated an American business-minded practicality. Was this just because they are artists and I’m both artist and entrepreneur? Or did it speak to a North and South American divide in thinking? Really, for me calculating a Facebook response rate was just second nature!

Americans feel too much pressure to be positive! Susanna, a Swiss-Portuguese woman whom I met in Salento, a picturesque mountain town in the coffee zone of Colombia, was one of the more fascinating characters that I got to know while in transit. Susanna was one of those impressive women travelers I met on my trip who know their passions well. One of hers was scuba diving with whale sharks, which she hoped to do off the Pacific Coast of Colombia. She seemed to have a plan of exactly what she wanted to do. These women speak in the “I” about their plans and if you want to join them, well, great, but she certainly wouldn’t be afraid to go on her own.

Susana and I both really wanted to visit these spectacular-sounding thermal baths in Santa Rosa in the coffee region of Colombia. Getting there from Salento meant taking three different buses but Susana was convinced it could be done as a day trip and that seemed easier than lugging our bags on three buses so I said OK, let’s do it. A huge bike race was going on in Colombia (sort of the Colombian Tour de France) which made the trip even slower. That gave Susana and I a lot of time to talk.

Susana and I got along very well, and had one of those deep conversations that you have with a person you’re going to spend only a day or two with. She told me I was only the second American she had met that she could get along with. Most of the Americans she met she felt were dishonest.

Dishonest, really? I asked. I found that sort of hard to believe.

Well, emotionally dishonest is really what she meant. I probed a little deeper.

She told me that when American travelers told her about their day back at the hostel, they always said whatever they did was fantastic. They bubbled over with energy, but as soon as they stopped talking about the museum, the horseback ride, the dance class, whatever, the energy drained out of their faces. She felt like they were performing their enthusiasm, as if nothing was really as good as they said it was.

So they feel a lot of pressure to be positive, I asked. Exactly, she said. How funny! Susana agrees with social critic Barbara Ehrenreich who delivered the same message in her 2009 book
Bright-Sided: How Positive Thinking Is Undermining America this past year. It’s about how forced positive thinking–the need to put a happy face on everything–is destroying everything from Wall Street to health care.

Not me! I’m not the too-positive American! I tend toward honesty. I had woken up that morning after not sleeping well and when Susana asked me how I slept, I said, horrible. I sometimes worry about being overly honest but apparently that scored me authenticity points with this Swiss-Portuguese traveler.

Americans are so sincere!But on the other hand, when we do tell the truth, we get criticized for that too! Last December I visited France after a long hiatus of not visiting for thirteen years. I had the good fortune to stay with Colin and Zenna in their Montmartre apartment. Zenna is my dear friend Halo’s cousin, and we had met the previous summer at Halo’s wedding in Northern California.

Colin, Zenna, and I got around to reminiscing about Halo and Karl’s beautiful wedding, and Colin told me, he could not believe the sincerity of the toasts. A best man, for example, could not be trusted with a microphone at a British wedding–he would get far too wasted and sarcastic! The toasts, by contrast, in our American circle of friends were all exceedingly heartfelt, and Colin and Zenna saw that as exceedingly American. I had thought that was just normal!

Six months later in Rio de Janeiro, I was hanging out with Brazilian friends and expatriates from England, Angola, and Ireland at the wonderful Bar do Mineiro, a Cheers-like place in Rio’s Santa Teresa neighborhood (kind of the Montmartre of Rio). People stand outside Mineiro for hours drinking and laughing, sharing beers, one after the other, pouring the beer into little glasses from big collective bottles. One of my best friends in Rio is Marcello and I was there with Marcello and his friends.

For some reason, that night Marcello’s friends decided it was the night to tell Marcello he needed to man up and declare his love for me. Marcello and I are just friends. I wanted it to stop, immediately. Apparently this made me an American with no sense of irony. I just felt absolutely mortified, and if that is an American reaction, so be it.

They love candy bars! My Belgian friend Griet told me she really enjoyed most of the Americans she met. She thought they all had a great sense of humor. (Belgians, as it turns out, are known for their sense of humor, so the compliment means something coming from her. Belgium, a tiny, young country created as a barrier to stop Napoleon, sandwiched between self-important France and the larger Netherlands, doesn’t take itself too seriously. People who don’t take themselves too seriously tend to be funny.)

Griet befriended a group of American guys from the Los Angeles area while traveling in Bolivia. She hopes to visit them in the U.S. since they got along so well. She said they were always wanting “American” things. They were traveling in Bolivia, one of the poorest countries in South America, and they always needed to find Snickers! There’s something really hilarious to me about a bunch of American guys in Bolivia on the hunt for Snickers.

Americans are on the move. I have to be honest and say there are not that many things that made me long for the United States this year. The conveniences of great hot water and fast systems for payment are nice, but they are not exactly the stuff that make you long for a homeland. One thing I do like about the United States though is our dynamic labor market. Yes, it absolutely sucks that we work too hard and the concept of vacation. let alone a career break, does not exist for many people. But it’s a stimulating place, career-wise.

When you are traveling, you don’t really want to talk about work. But every so often it is nice to have a good talk about your life path, and the best people I found to have this conversation were Americans. My friends in Brazil and in Europe tend to stick with the same job or career. In Brazil, many of the best middle-class jobs are acquired through a good score on a concurso, a test for employment. And once you get a good job, you stick with it. Europeans are much more likely to stick with a career as well.

Americans, and in particular, the San Francisco people I met (and also some Atlanta people) just seem more open to scheming, to career change, to creative ways to make a living, working remotely or through real estate investment or through a thousand different ways. I appreciate that spirit of self reinvention, of being creative and remaking your life. And that is one great freedom of the United States, the opportunity to make it up as you go along.

On the other hand, Americans could also be quite obnoxious talking about work constantly even when they were in paradise-like beach towns. Most of these work obsessives were from New York. I remember one twentysomething New Yorker couple having dinner next to us in Jericoacoara, a remote, spectacular beach town in Northeastern Brazil. The girlfriend was fawning over the boyfriend telling him what a genius he was, and how his new start-up was going to be a huge success. He was going to make millions, for sure.