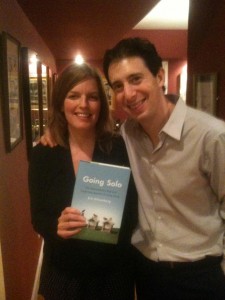 When I turned 33, a bunch of my friends got together in a huddle in a bar and talked about where we wanted to be in 30 years. Some people talked about traveling the world, another talked about having written many books. I talked about my desire to live in an assisted living facility.

Everyone laughed at me. “You want to live in an old age home when you are 63?” I said, “I want to live in an assisted living facility now!” I thought it would be great to live in a place that combines private space with services and community. Where all my friends could live close by and it would be easy to hang out without making plans two weeks in advance. My ideal assisted living facility (aka cohousing) would be a college campus but without the academic pressure and all the fun. (And now that I have been diagnosed as having celiac, let’s create a cafeteria with gluten-free meals, OK?)

Disclosure: the author Eric Klinenberg has become a friend since we first met a few years ago. He interviewed me and my story of chucking it all to go to Brazil (as well as the story of caring for my aunt, a quirkyalone who suddenly found herself very vulnerable when she got a brain tumor) are in the book. My bias out of the way, I can say: Going Solo is a brilliant book that will change the way you look at being single and living alone. If you’re in a relationship and live with a partner it will also change the way you think about your space.

Eric has the gift for naming the elephant in the room. The trend of people to live alone stares us in the face but no one else had the genius to name and study its implications so clearly. A sociologist at NYU, he and a team of researchers interviewed over 300 people ranging from urban twentysomethings to elderly shut-ins to learn why it is that increasingly people–all over the globe–want to live alone. Even the elderly, whom we assume want to live with family, often express a clear preference to live alone. Why? The answer is quite simple: Because we can. The desire to live alone is a feature of a prosperous society.

One of the biggest surprises for me was reading about how elderly people want to live alone. Klinenberg writes, “Single senior citizens are also uninterested in moving in with family. Although a century ago nearly 70 percent of elderly American widows lived with a child, today–thanks to social security, private pensions, and more widespread prosperity–only 20 percent do.” Elderly singles want “intimacy at a distance” with their children and grandchildren, to live close, but not too close.

Sweden leads the world in combining living alone with lively social interaction. In Sweden, 47 percent of all households have just one person, as compared to about 28 percent in the U.S. In Stockholm the global capital of living alone, 60 percent of households are solo dwellers. Sweden has both a commitment to individualism and collectivism, and support young people in the mission of living alone. Eric goes to visit some amazing-sounding buildings in Sweden that sound just like the fantasy I talked about at my 33rd birthday–where people can live alone in their own private spaces with their own kitchens and also eat together communally and not have to cook. These places are in hot demand in Stockholm and I think they would be in hot demand here too.

We want to live alone and we also hunger for connection. How do we satisfy both urges? Eric writes, “Unfortunately, the fastest-growing part of the American metropolis is the suburb, and that’s also the place that proved most inhospitable to people who live alone.” Dense cities are often better for solo dwellers. I want to see more cohousing and other experiments. Get rid of the hippie “communal” idea–let’s create smart design that appreciates where we stand today.

Going Solo explores the world of the indigent and the elderly shut-in. The trend toward living alone demands government policy that will ensure we are all safe and taken care of. Eric tells the story of cutbacks to the Meals in Wheels program in New York City which inadvertently reduced the amount of human contact that elderly shut-ins received when people would come to deliver their food. Some of the stories made me very sad. Even if we get married, or have children, the future is unknown: none of us know what will happen to us when we get old and become vulnerable. We are all interdependent as much as we cling to our independence. We need to design new ways to support each other in our desires to be alone and together.