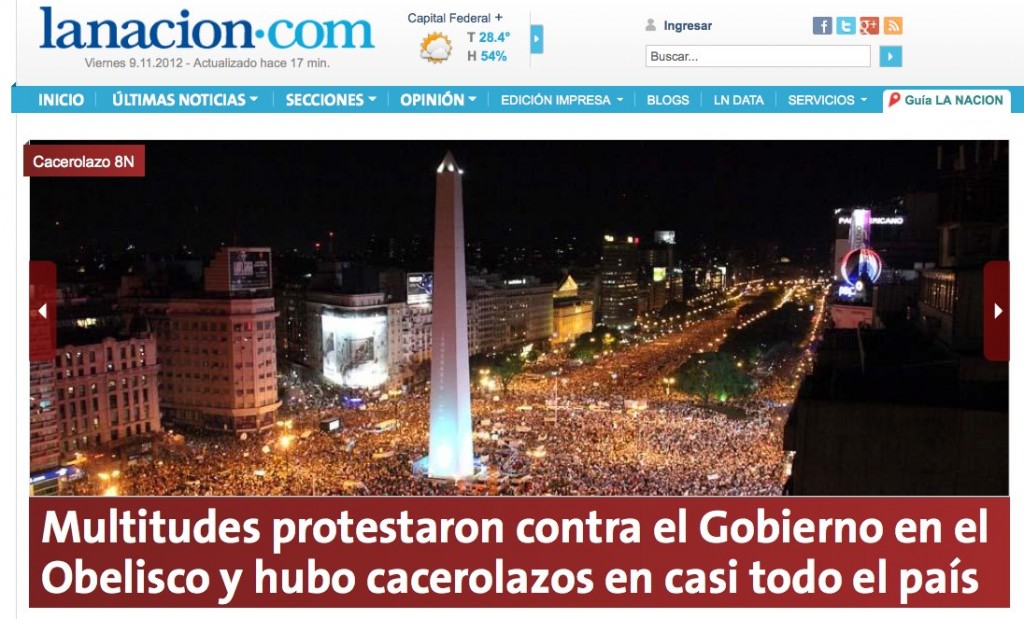 When I first got interested in South America, I spent a lot of time in Brazil (my first South American love as a country) and I heard the saying, “Brazilians party and Argentines protest.” Indeed. Argentines were born to protest. It just seems to be in their genes. Few Argentines dance tango but many talk politics. Argentines are also really good at complaining and looking at the complexities of life, but that’s another story.

The anti-government 8N protest (or cacerolazo, pot-banging protest) in Buenos Aires this past Thursday was spectacular. I’ve never been to a protest quite like it. I met up with two Colombian friends (one of whom has been living here for four years, so she has her things to protest about) on Santa Fe, one of the main avenues with people streaming into the downtown Obelisk, and we joined in for the ride. The streams of people blew us away. We have no protest tradition like this in the U.S. or Colombia where it is a mainstream activity to go out in the streets with hundreds of thousands of people and cheerfully bang on pots and pans to speak your complaint about politics. The crowd was diverse: Girls in their Catholic school outfits, mothers pushing strollers, elderly folks, everyone. People seemed so happy and alive and dignified streaming down the streets. Protesting seems to alchemize complaint into joy.

Why were people protesting? Many different complaints. The principal ones were about corruption, crime, inflation (estimated by private economists at 25%), retiree pensions not keeping pace with inflation (making it difficult to get through the month), and president Cristina Kirchner’s efforts to reform the Constitution so that she can be elected for a third term. The 8N was truly something to feel, something unique that I have never felt at another protest, and I have been to many protests in my life. I’ve heard numbers ranging from 250,000 to 700,000 cited in the media. Honestly I don’t know how they can get an accurate count because people were streaming into the Obelisk area from all over the city.

The Guardian UK reported on the 8N demonstrations; and here’s the Washington Post.