Have a Nietzsche Day in Santa Teresa! 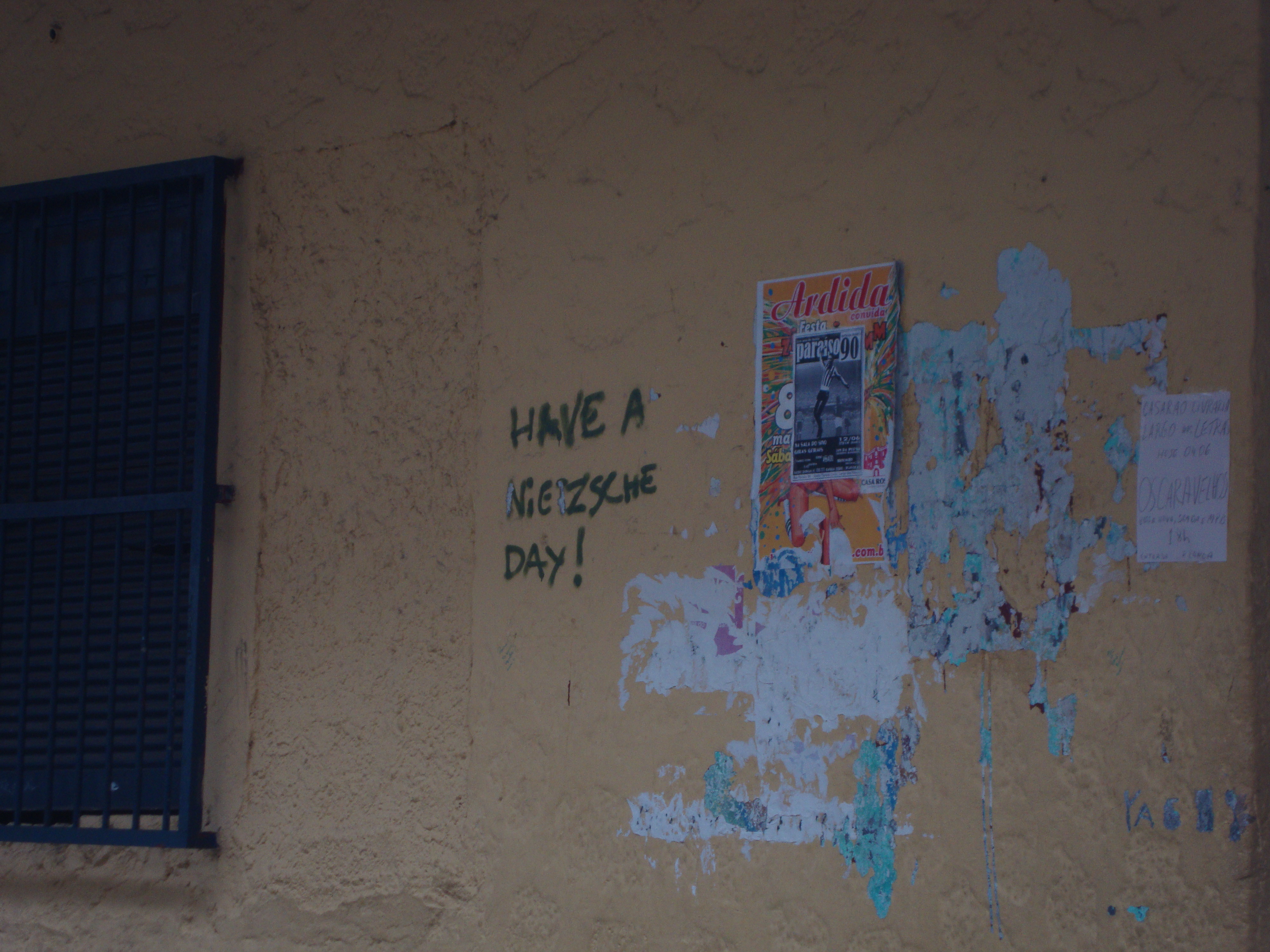 Just another morsel of poetic terrorism in Santa Teresa

Every day when I got on the bus, or on the poetic yellow cable cars rambling through Santa Teresa, Rio’s hilltop bohemian neighborhood, I would see this splash of graffiti, if you could call such simple handwriting graffiti. “Have a Nietzsche Day!”

What an intellectual neighborhood I chose to live in for a while, I thought to myself, smiling. At the nearby Mercandinho, an impossibly small corner store that sells coffee, beer, carpaccio, papaya, laundry detergent, I meet poets who had hung out with Allen Ginsburg. Everyone is an artist, writer, translator, weird Carnaval bloco organizer. Maybe an American working on her Fulbright in poetry. Or someone like me, just bumming around and enjoying.

Poetic terrorism is what my friend Roma calls it. According to Urban Dictionary, poetic terrorism is a “movement dedicated to spreading random acts of beauty, poetry, wonder, magic and thought-provocation. The concept was originated by the writer Hakim Bey and has appeared in movies such as the cult French film Amelie. Poetic terrorism differs from the concept of “random acts of kindness” in that its acts are not always kind, but its ultimate goal is not malice, but broadening of the mind.”

Roma’s girlfriend Iracema studies Nietzsche. She too lives in Santa Teresa and often tells me to have a Nietzsche day a lot. I don’t think she is responsible for the scrawl, but she has adopted it for her lexicon.

But what does “Have a Nietzsche Day!” mean? I had always associated Nietzsche with nihilism, meaninglessness, being adrift without a moral compass. Why would I want my day to be like that? Downtown from Santa Teresa, which is calm and beautiful, the Centro and Lapa are beautiful too but much more hectic and chaotic. And full of malandros, sneaky characters who lack a firm morality.

Iracema and Roma gave me a different take on Nietzsche. Iracema wrote her doctoral thesis on him, and from what I gather, for them, Nietzsche is about breaking through social rules and affirming life according to authentic desires. Iracema says, Having a Nietzsche day means “a day in which we not ashamed of who we are.”

So having a Nietzsche day for them means smashing paradigms, living fully, authentically. There’s a non-cheesy Carpe Diem feeling to it, a live-every-day-as-your-last, because death is not so bad. It’s just the conclusion of a well-lived, full life.

Our conversations, if not the exact definition, remind me of early talks that I had with my friend Marcello, who also lives in Santa Teresa. Marcello, who works at a bank, and is quirky but not an artist, warned me early on that it’s a crazy neighborhood, and all his friends, some of them expatriates, act like they are living each day as their last. How is that possible to sustain over years? That was his question.

Brazil is very much about the moment, and Santa Teresa and Lapa take the energy around the present moment to another level. The music never stops. Maybe only on Mondays.

In San Francisco, Sunday night is a time to be quiet and prepare for the coming week, Maybe make some soup. Do your laundry. Not in Santa Teresa. It’s time to drink beers in the street in front of Bar do Mineiro for 6 hours straight, or to go to a roda de samba. Living out loud in the streets is relaxation. Life is lived at a different frequency.

Would I be cut out for such a life, for having a series of Nietzsche days? Could I be a superperson? Could you?

Living at a high frequency all the time leaves me rather exhausted. So does rewriting all the rules, though I seem to enjoy tinkering with them.