24 Hours in Paris (or my Parisgasm) 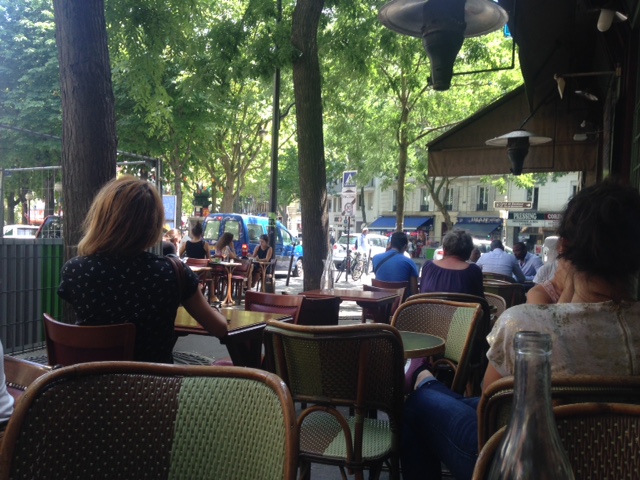 During my 2017 Forever Young Tour, I’m going to do a recap on the first 24 hours in a new place, or a place where I have visited before. I’ve heard it said that there are two ways of doing travel writing: you can write about a place from deep knowledge, or you can capture your snap impressions. I’m going to experiment with capturing the first impressions, with all humility and acknowledgment that they are the impressions of a first day in a new place. It’s not the same as writing about a place where you have lived for a long time–see, for example, this post from a woman who moved to Mexico with her husband who had been deported from the US. Still, there’s an aliveness and freshness to new eyes that older, more inured eyes can’t compete with. So here’s my contribution.

So my first 24 hours in Paris! Impressions! I used to think of Paris as bourgeois and stuffy but my overall impression after 24 hours is a freewheeling, artsy, super-diverse city with a lot of joy for living. I got that idea last time when I met a bunch of Parisians who complained about coldness, but I haven’t experienced that this time. People seem very warm. Maybe it’s the weather. I was here in December last time, now it’s steamy July.

Here’s a little spontaneous video I made after arriving, on the first day:

My little ode to #belleville in #paris the neighborhood where I am staying on little sleep but a little coffee and #travel euphoria to keep me going. Paris je t'aime!

More globalized than ever
I arrived at 6 am at Charles de Gaulle on July 4 and took the RER train then the metro into my airbnb in the 19th arrondissement. On the RER train we shot through the suburbs. I had stayed in the suburbs one night last time I was here in 2009 with a Tunisian friend made from Couchsurfing, and I’ve read enough about Paris to know that the suburbs are where people from former French colonies have felt isolated and cut off from economic opportunity. The challenges of a post-colonial world are real. All that said, I have to say, Paris felt remarkably diverse and peaceful on the train on the way in. Over my first 24 hours I saw a lot of cultural and racial mixing in the cafes near my apartment in the Metro Jourdain area, a lot of interracial friendships too (how can I tell the women were friends? You can just tell). So while I can’t pretend to know the ins and outs of post-colonial racial mixing in Paris, I will say, I have never seen a city with more people in hijabs, or women in saris, or people of all races–and everyone basically seems to get along on the buses and metros. Fascinant. Oakland is the only other place where I have lived and seen such mixing. Cities like New York are diverse, but I never really felt that people mixed.

I am in love with the idea of people sitting drinking beer, coffee, wine. 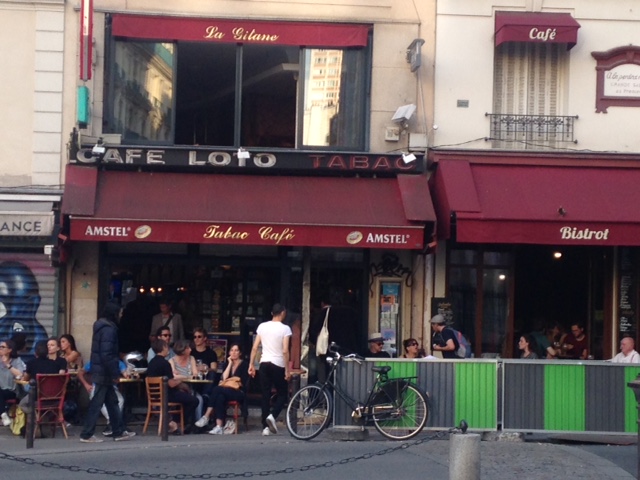 Wandering Paris is Parisgasmic.
During the first 24 hours, I needed to sleep, but by day two I could start to wander and it came back to me: I love being a flaneur in a new city. A flaneur is the solitary observer who wanders the streets and observes the crowd, a term coined by Baudelaire in Paris in the 19th century. There is no city where it’s more intoxicating to be a flaneur than Paris. Paris is beautiful. It is an aesthetic experience to walk the streets, to look at the way the light hits the buildings, to walk along the Seine. I don’t see any need to do touristy things in Paris. All I have to do is walk the streets and magic will come. Today I went looking for this delightful restaurant and cafe where you can literally work on your laptop inside a bathtub or on a bed! On the way I stumbled on the Parc des Buttes-Chaumont. Later my friend Alexa said it’s the most beautiful park in Paris. There’s always something beautiful around the corner. 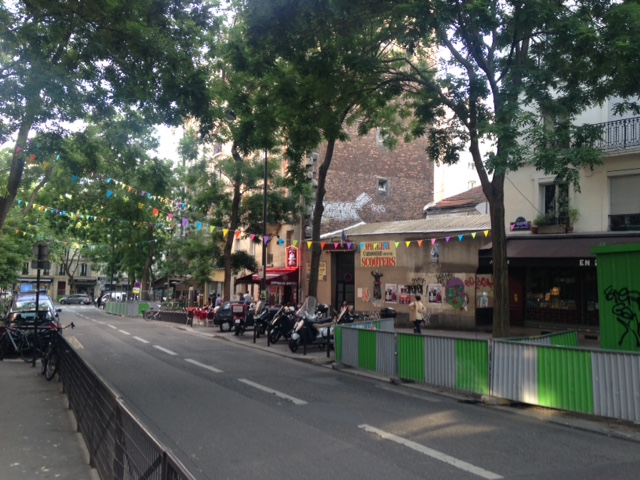 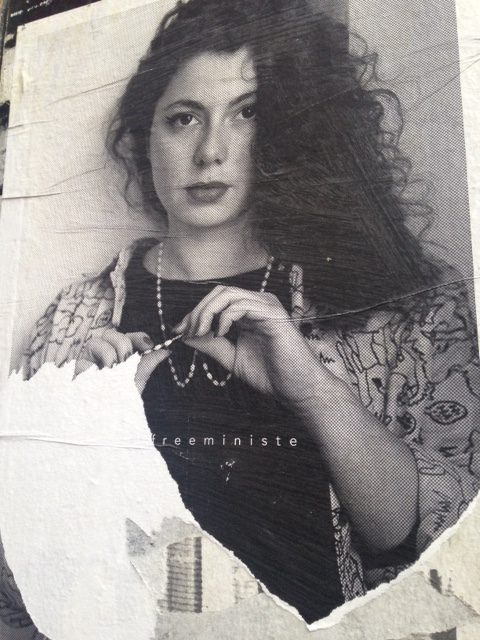 I used to think there was a Parisian uniform that was neat and trim and always involved a scarf. I used to think I could never blend in Paris and I would always stick out as a gauche American. I feel more breathing room in the fashion now. The fashion is still expressive, fun, unique, but the fashion seems more diverse and expressive. My guess is that’s because there’s so much global influence now there appear to be more ways to be French.

Jumping into the global tango culture
One of the best parts about being a tango dancer is that you always have somewhere to go at night when you visit a new city. On my first day, I slept six hours so I could get up my energy to go out and meet Sabine, who had come on a Tango Adventure in March in Buenos Aires. Sabine sent me an email two months ago inviting me me to meet her at a milonga on the Seine. Sabine lives in DC but she is from France and happened to be visiting. My friend Alexa was also planning to go, so we went and met up with Sabine and Senami, who had both come on the March Tango Adventure. How magical it was to dance tango on the Seine on July 4. Tango is a global culture and it’s always fascinating to plug in in a new place.

When I left the milonga the metro had already closed so I had to figure out a way to get home. A taxi was an option but maybe it would be very expensive. Some new French friends guided me to the bus stop and we found another French woman who agreed to tell me the stop to get off at, Gambetta. I didn’t have a European chip yet for my phone, so I had no GPS. But there’s nothing like new friends to be your own personal GPS. That’s part of the magic of traveling alone, especially as a woman traveling alone. People come out of the woodwork to help you along get where you need to go. (It’s easy to forget this when fears come up about traveling alone, but strangers really do help out.)

Next door to the cafe-barge hosting the milonga there was a big USA party to celebrate the Fourth of July too. (Don’t worry about traveling in the Trump era! Generally people know how to separate people from their leaders.) 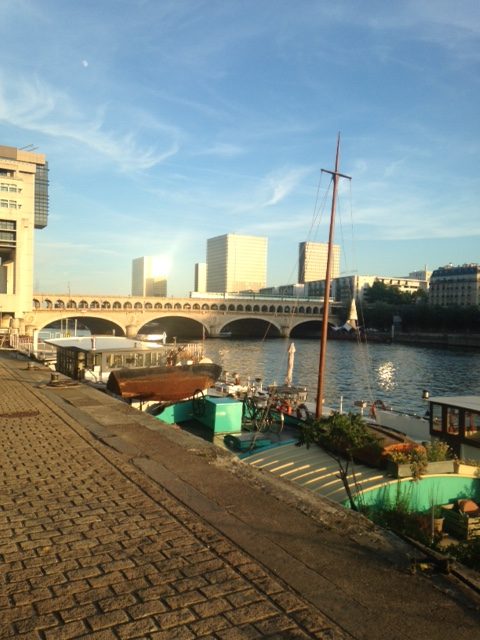 Walking along the Seine looking for the milonga. La vie est belle! 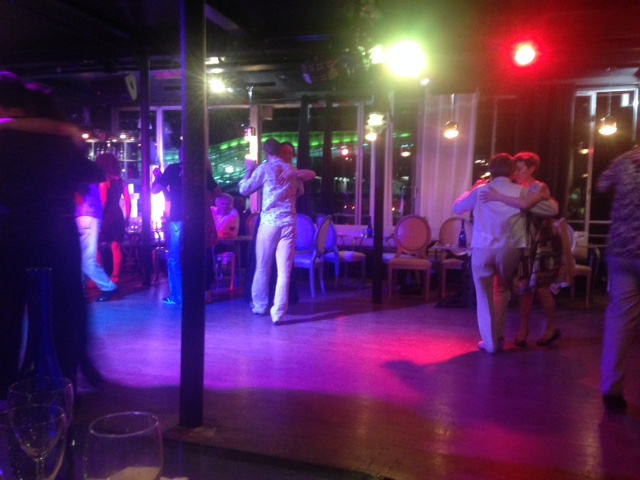 Paris milonga on the Seine on a cafe-barge (the night I arrived!) 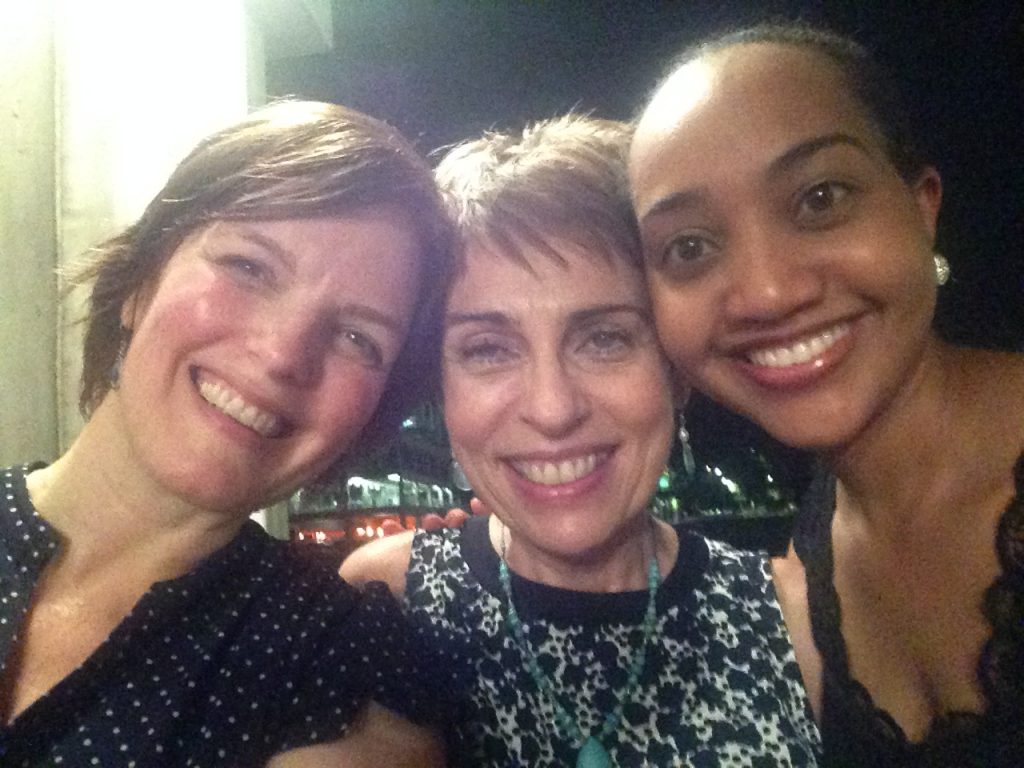 Senami and Sabine joined me in Buenos Aires for a Tango Adventure. Amazingly we met up in Paris on the day I arrived at a milonga.

The food is still a delight, even as a celiac
During the first 24 hours I have a special challenge in any new country: eating. I was diagnosed with celiac disease in 2010 a year after my last trip to Paris. This means I need to make sure that my food is gluten-free with no traces of contamination. We’re the people who have to take gluten very seriously. Undaunted, however, I had read up on eating gluten-free in Paris and knew it had gotten better for celiacs over the last five years.

On my first day, I went in to this lovely cafe two blocks from my apartment to explain my needs and ask if they had anything gluten-free. “Nothing sans gluten,” the bar man said. “A salad?” I asked. I explained to them what it means to do gluten-free. They said sure, they could do a salad. The waitress brought the salad out with a piece of toast on the plate. Of course I had to say no. She snatched the toast away thinking this would be sufficient and I had to say no again. A piece of toast on my salad plate is clear cross-contamination. (All a celiac needs to activate the disease is 20 parts per million of gluten–a miniscule amount.) “I’m a celiac, it’s a rule,” I explained in French. “Un regle.” I asked her if she would go back to the kitchen staff to explain. She came back and said they would replace the salad, this time being careful, washing their hands and everything.

Here was the poached salmon salad that came back. it was gorgeous and delightful. I ate all of it.

Update: My French friend Eric read this post and told me, actually Belleville the neighborhood where I am staying is one of the most “popular” (meaning down-to-earth, mixed, and racially mixed) neighborhoods in Paris, and that many of the other arrondissements feel like rich, white ghettoes to him where even he, being white, feels uncomfortable. Some people like that, and some people don’t. So my sense of a different Paris was confirmed. f you want that friendly mixed feel you should try staying in Belleville, or at least visiting it.