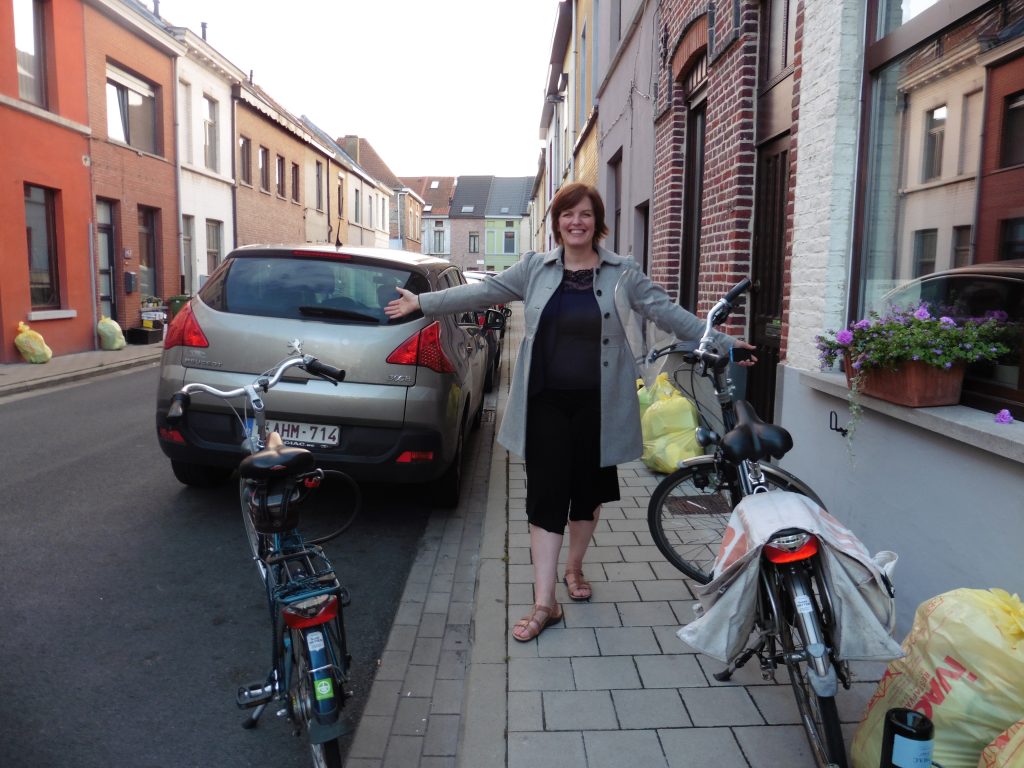 the streets of gent are alive with . . . bikes!

I’ve been hearing about the Belgian city of Gent for seven years now since I met my friend Griet. Griet and I met in a hostel in Cali, Colombia, the world capital of salsa, in 2010. She asked me to go out to a tango club the week we met–and the rest is his(her)story. We recognized each other as kindred spirits and we wound up spending the next two months together taking tango classes, and then, we went to Buenos Aires together for two months to discover the “real stuff” of tango together in Argentina.

Through it all, over many coffees and bottles of wine, we talked about where we had come from and where we were going. We had both quit jobs that didn’t feel true to ourselves to open ourselves to what would come next. For me that was the fast-paced, screen-obsessed world of Silicon Valley that I felt was more bent on addicting people to make money through advertising than anything else (I felt then just as Tristan Harris does now–as he sounds the alarm that most technology companies are working to drain our attention spans for their benefit and not our own), and for Griet that was organizing activities at a community center. We were both single back then, and many times, Griet told me, “Just come to Gent. We’ll find you a nice Belgian man!” She also described Gent as very cute.

Griet changed the course of my life by bringing me into tango, and just by being herself, a woman of high vitality who always says things like, “If I’m really honest. . . ” From Griet I learned that a turned-on life based on things you really want to do and embody begins with the phrase, “If I’m really honest. . . ” So I knew, when I planned this trip, I would have to visit her in the famous Gent! It had been five years since our last meeting in Asheville, North Carolina. This would be our fourth country, and our third continent, since we met in Colombia, then in Argentina, then in the U.S. five years later, and now, in Belgium! 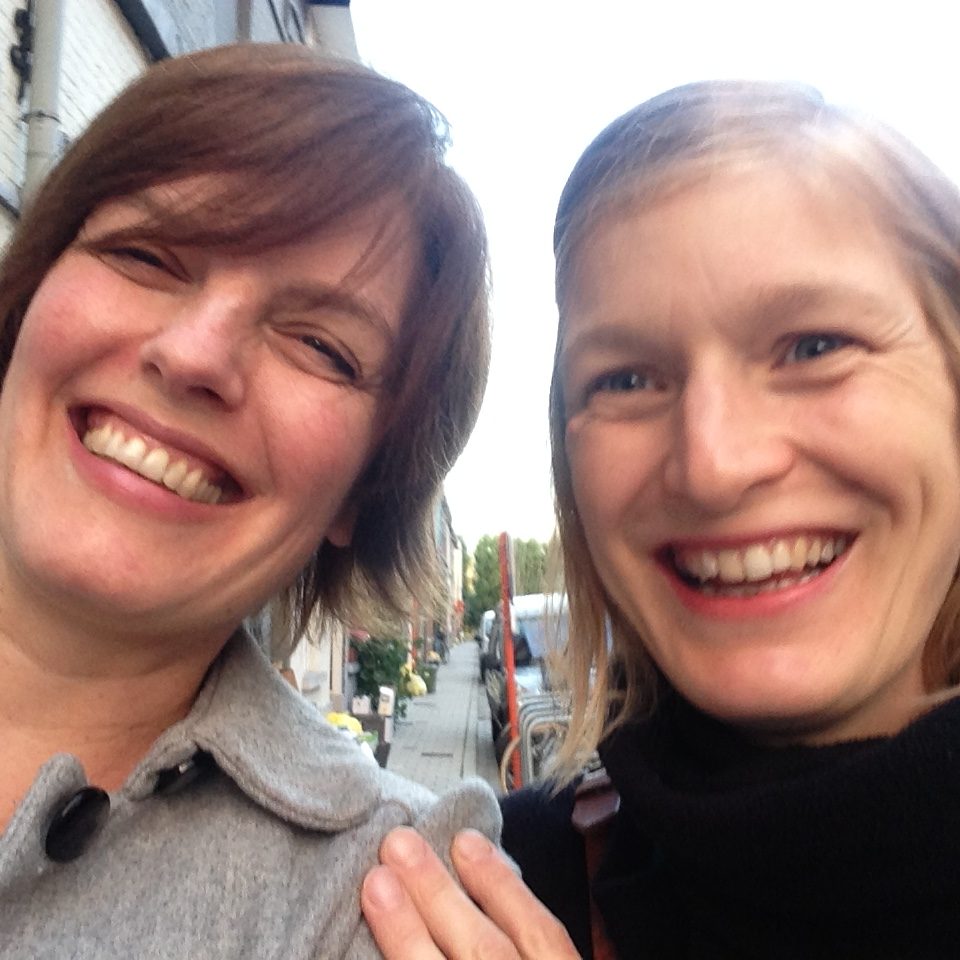 the reunion of sasha and griet in gent!

Much has changed in both of our lives. Now I live in Buenos Aires (not Silicon Valley) where I have a tango business combining the dance with coaching (I also coach people one-on-one on everything from career to sexuality and write). Griet settled down with a man, and has a two-year-old with another baby on the way after opening a vegetarian restaurant. So I was excited to go and see Griet again. I expected our reunion would be great. I had no idea what to expect of Gent.

Belgium itself is vague in the imagination. The headquarters for the EU, Belgium always seemed to me a small place sandwiched between France and the Netherlands with no big personality of its own. I knew Belgium was split in two parts: people speak French in the south and Flemish in the north. I mistakenly thought Flemish was a language of its own. In my week in Gent, I realized Flemish is actually Dutch–a revelation on its own! In a lot of ways much of Belgium seems quite similar to the Netherlands. But it’s a small country between two big countries. I can identify with small places, having grown up in Rhode Island. I know there’s a special power in being the underdog, overlooked place.

So Belgium?! Gent?! What was it all about? People don’t really think about Belgium much–you have your Belgian fries and your Belgian beer, but beyond that, what can you say about Belgium? I would soon find out with Griet. 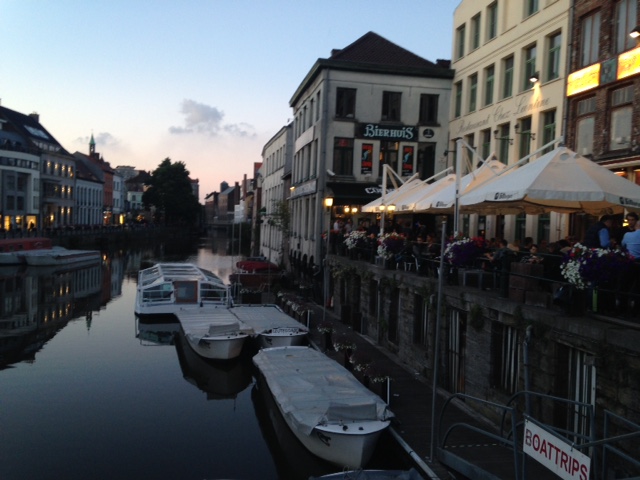 gorgeous Gent on my first night

On our first night we went out for a bike ride around Gent after Griet’s son was asleep. Already I was feeling bowled over by the beauty of the residential streets where Griet lived. Very simple, row houses of different hues, and most of the houses had bikes parked in front of them. It was like an alternative universe where instead of cars parked outside (though there were some) you had bikes parked outside with locks built into the structure of the bikes and the tires. Often the bikes had baby seats on them. Some of them were bikes built for two. To an outsider Gent looked like it was going through a baby boom where all the parents rode around with small children on their bikes. 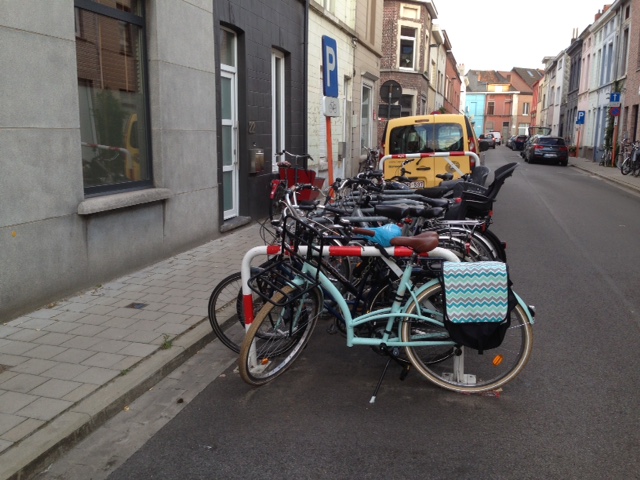 the bikes in gent!

We biked past canals on bike lanes (reminiscent of my trip to Amsterdam 20 years ago) on bikes with big bags on either side of the wheels in the back. All the bikes in Gent had these bags. Then we arrived downtown and to put it mildly I was stunned. The city center of Gent is a gem. I was expecting “cute” from Griet and Gent was actually beautiful. Maybe this is part of the Belgian personality: modesty. The French have their rakish charm, the Belgians are more humble. I find that small places often have that quality. The Uruguyans too are modest and approachable compared to Argentines. (Small place next to big country.)

Gent is not so small. The city has 250,000 people and the city center is large. Here’s what Lonely Planet says: “Here hides one of Europe’s finest panoramas of water, spires and centuries-old grand houses.” I would add to that, canals, bikes, cute people, and lots of biological (organic) cheese. Gent is a kind of fantasy of urban planning: small houses, bikes, small families on bikes, and tons of organic food everywhere. Seriously, if you are looking for a great, livable, more than cute city, Gent is the one. 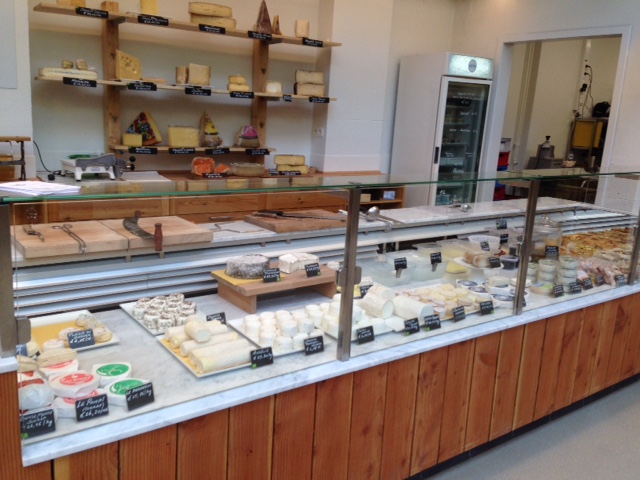 One our first night, we went to a bar that is famous for catering to travelers. I got a mojito, Griet got a virgin mojito since she’s pregnant. We started to catch up, finally getting to the man situation for me. Would I need Griet to find me that Belgian man? I told her about the latest in my love life and after that a guy a few tables over waved us over. He was an American, obviously–we had overheard him. He was from Dallas by way of New York and his mother had started a magazine in Belgium which somehow got him established in Gent. He had been living there for years and loved it.

The American gave us his critique of Gent: “mundane.” He thought life could be mundane in Gent because everyone was expected to settle down with a partner, buy a house, and pop out a kid or two. Of course that’s what Griet had done. She agreed with the critique–that life in Gent could be mundane.

I asked Griet if she thought I would feel isolated since I’m not married and don’t have children. She thought not.

I wasn’t sure if mundane was so bad when you have bikes, biological cheese, and beautiful canals.

Would it be mundane to live in Gent? So what is life in Gent like? For now I can’t really know, but here are some pictures to show you how fabulously cute–and beautiful–the city is. 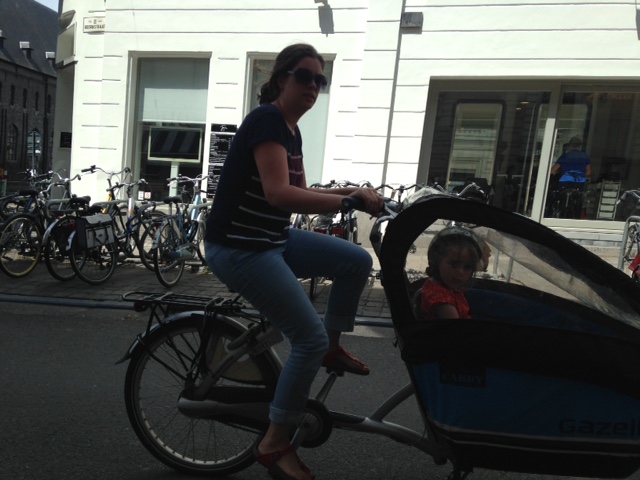 Just one of the many bikes with child on board. So many versions of accommodating parent and child. 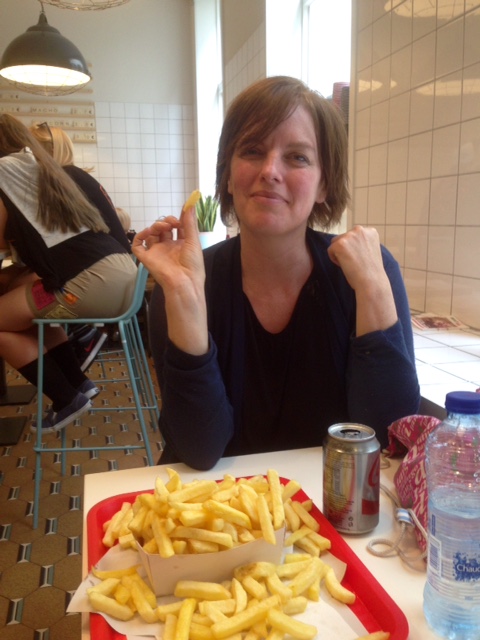 we ate them all! 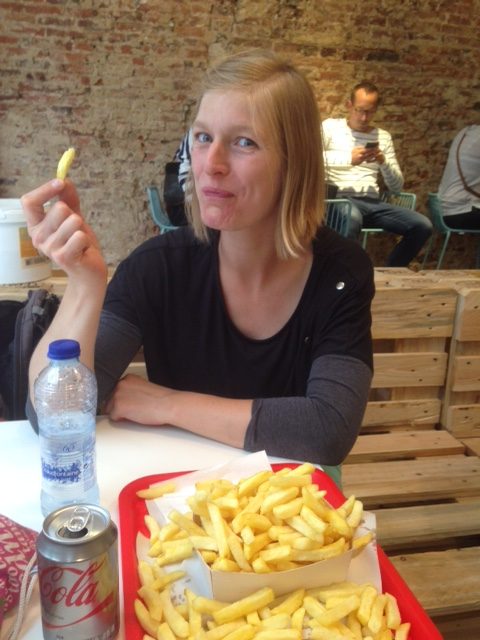 Griet ate some Belgian fries too! 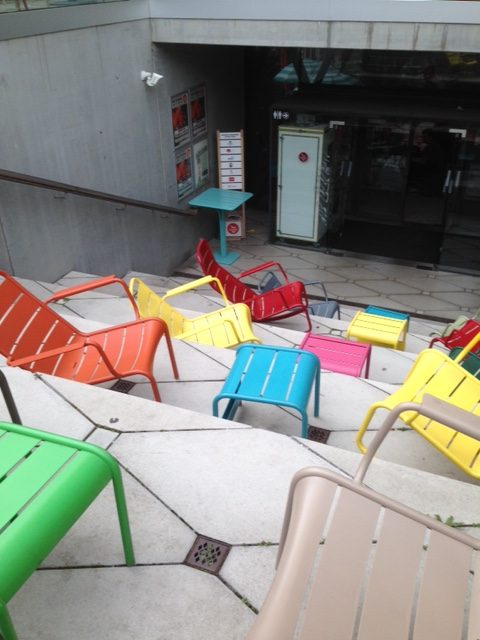 chairs at the cafe at voorhut, an old socialist hall transformed into a modern cultural center 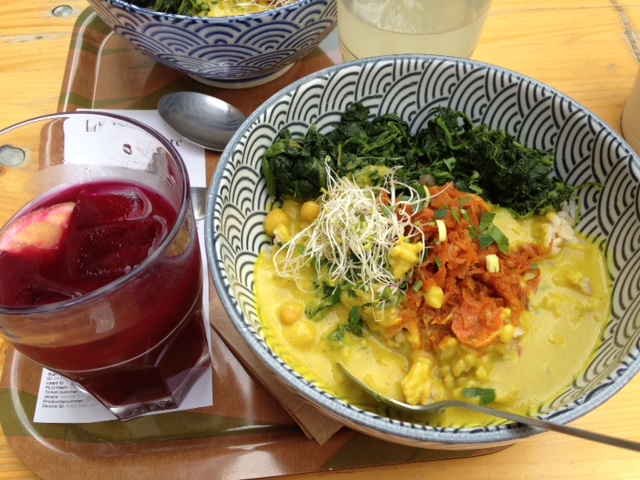 to die for curry bowl, gluten-free at Le Botaniste 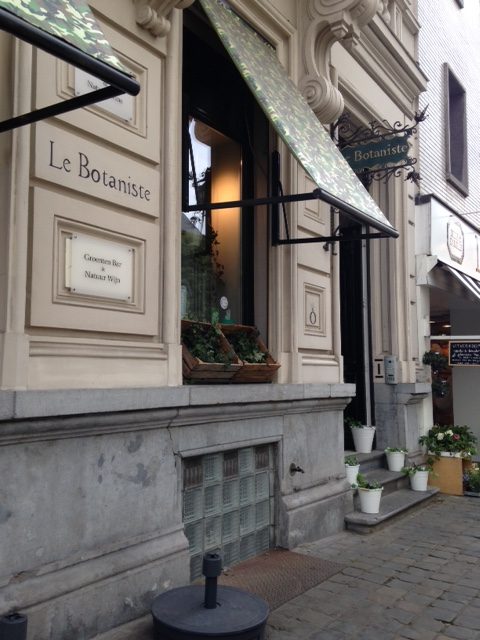 visit Le Botaniste for lunch in Gent. You will not be sorry.