Trick or treating as a childless, fortysomething woman. I mean, WHY NOT? 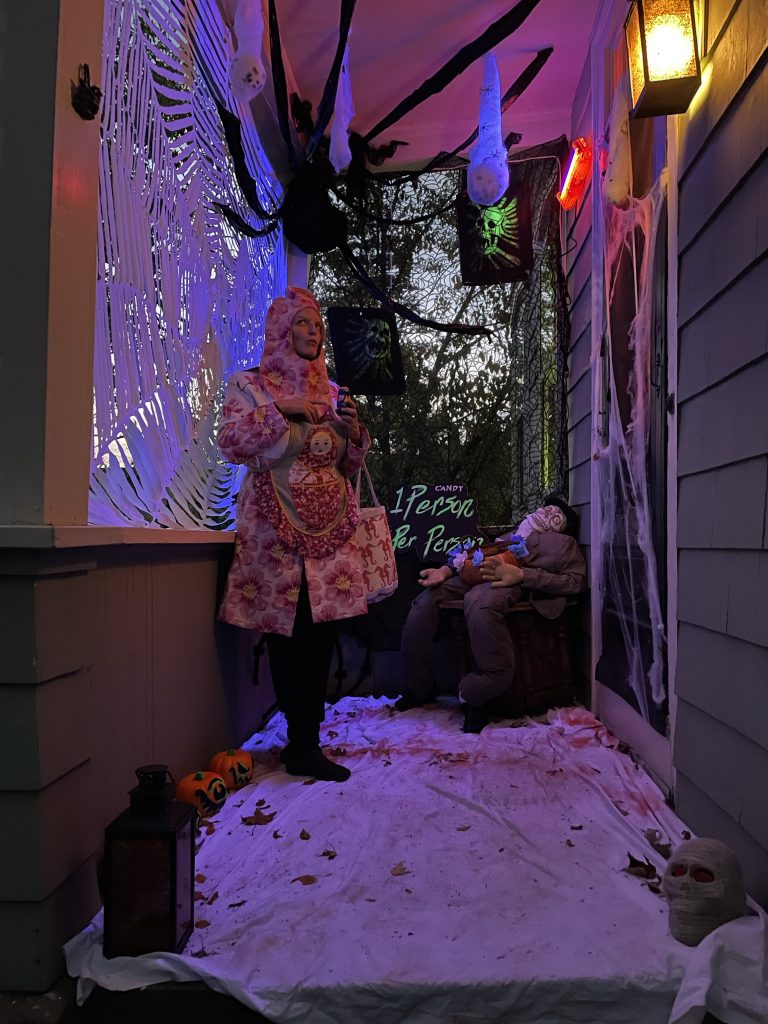 trick or treating as a childless fortysomething woman – yes it can be done!

After Tanya and I hit up a few houses trick-or-treating on my block, collecting Dark Kit Kats and Smarties, I tried to convince my friend that people might be taking us for teenagers.

At the next house, a sixtyish woman dressed as a witch wryly asked us, “Aren’t you too a little old to be trick or treating?” There was a glint of amusement in her eyes, however, and it turned out she loved our costumes. She, like all the other adults, offered us candy.

Tanya was “the wolf in cheap clothing” with a big animal head obscuring her adult face and price tags for $1 pinned all over her outfit–everyone is going to love you with that terrible pun! Tanya was literally spreading joy around the neighborhood. I was wearing a Russian Doll/Matryoshka costume, ironic since a Russian doll is a traditional representation of the mother carrying a child within her–ummmm, we were trick or treating as grown adults without any children!

We joked about going out with a fake child (marionnettes?) as our costume, but in the end we learned that adults — even childless adults — can successfully trick or treat, at least in my relatively progressive neighborhood in Rhode Island.

Were we nervous? VERY! OF COURSE! Trick or treating as a childless, fortysomething adult was an adventure way outside the comfort zone. I hadn’t gone trick or treating since my sophomore year in college, and really had no idea how people would react. I was prepared for people to judge us. But actually, everyone welcomed us.

There are plenty of parents out there in costume handing out candy and walking around with their adorable kids, and hey, if you happen to not have kids, why can’t you trick or treat too?

As Tanya and I discovered, trick or treating is still one of the best ways to meet your neighbors. If it’s scary to meet new people, then it’s all the better. Halloween is the holiday to get your spook on.

Click over here to watch a video we made at the end of the night talking about what we learned about the mildly subversive activity of going trick or treating as childless, fortysomething women, using the Russian doll as a microphone.

I currently have a big candy haul in my kitchen in a bowl, the majority of which I cannot eat because I have celiac disease (no gluten!). Want the candy? 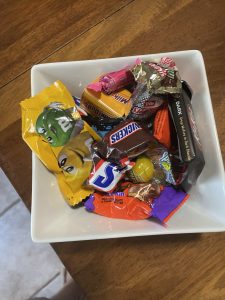 glutenous candy stash to be distributed

Give a shout out on the comments of the video!