Is Tango Better than Sex? 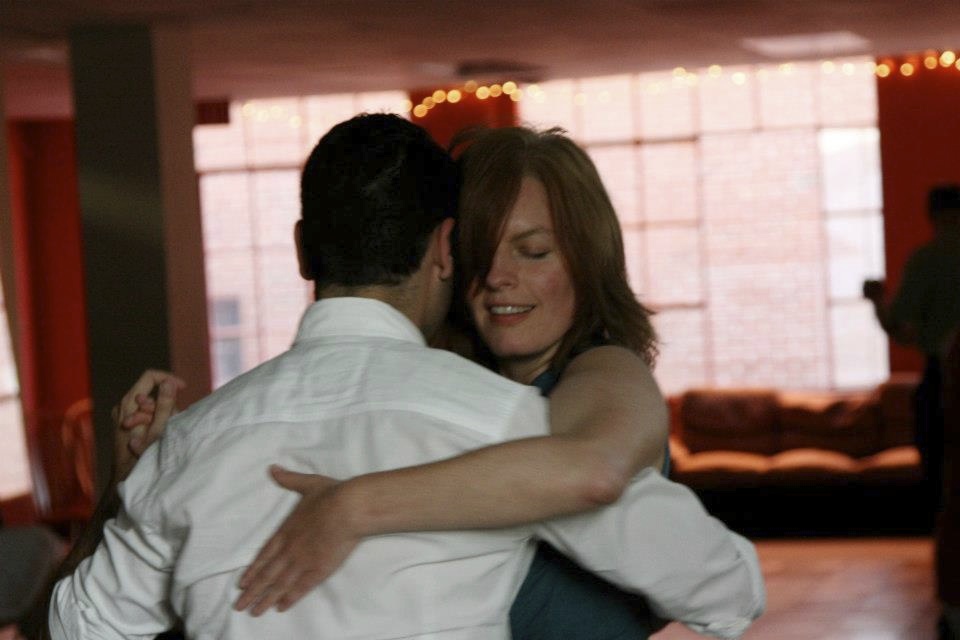 I am a tango addict. I have been one now for four years.

I did not go out looking for tango. The dance came to me. It was in Cali, Colombia, the world capital of salsa, where everyone dances, that I saw tango for the first time. A Belgian woman named Griet who was also staying at my hostel invited me to come out with her to a club called La Matraca, and there, I saw a tango danced for the first time. I felt something in my body across the room.

Tango was nothing like the image I had mysteriously developed of the dance, the march of a man and a woman their arms outstretched across the room, the woman with a rose clenched between her teeth. (Where did I get that image? Later I looked on the Internet and found no definitive answers.)

There was a palpable, mesmerizing physics between them, every step he took invading her space caused her to walk backwards, every movement so closely coordinated. She invaded his space too. It wasn’t like salsa, all happy-happy. This was like watching the hologram of a connection.

I didn’t dare to think that I could dance tango. I had never done much partner dancing. But my curiosity is big and I tagged along with Griet for lessons the next day for lessons in a garage across town with the performer who had wowed us that night. Thus began the journey, the roller-coaster, the ups and downs, the pleasure, the connection, and soon, my first tangasm.

My first tangasm
I didn’t know there was such a thing as a tangasm or have a word for it when it happened. I felt supremely awkward, in fact, and wobbled through my dances with teachers whom I forced to dance with me at clubs. A few weeks later, I met Oscar, a proud short teacher who danced salsa, tango, folkloric Colombian, cha cha cha, and more.

Oscar saw me wobbling and told me, “Come on, tango can be easy, I’ll show you how.”

In contrast to my first teacher who was all about teaching me to do the steps “right,” Oscar taught me how to play and not care about doing it perfectly as we walked and whirled around the room.

During our third lesson, that’s when it happened. When we danced, our chests velcroed, hugging in a tango embrace, I felt blood coursing through me everywhere. The dance pumped me with extraordinary amounts of oxytocin, endorphins, whatever the hormones were, they were working. Tango is a dance based on a hug, and this was an hour of continual hugging and dancing. It only takes 20 seconds of hugging to release the pleasure hormone of bonding oxytocin; imagine what an hour does!

The essence of tango, especially for the follower, is to focus on feeling rather than thinking. I have always been a thinker, and feeling is what had been deficient in my life. Here was a dance where all I had to do was feel, and feel I did, all over my body. I had no desire to have sex with Oscar. Already what I felt was on par with the best sex of my life. My cheeks and chest showed it. Tango got my brain to turn off.

After the lesson ended, I ran to the café where Griet was drinking her afternoon coffee. I whispered in her ear, “I think tango might be better than sex!”

Griet gave me a once-over, her eyes going through a checklist of signs. Flush cheeks and chest. Nipples showing. Light mist of sweat. Hair matted down with wetness.

Griet said to me, “I think you have had a tangasm.”

That was my first. You never forget your first.

A better cure than sleeping pills 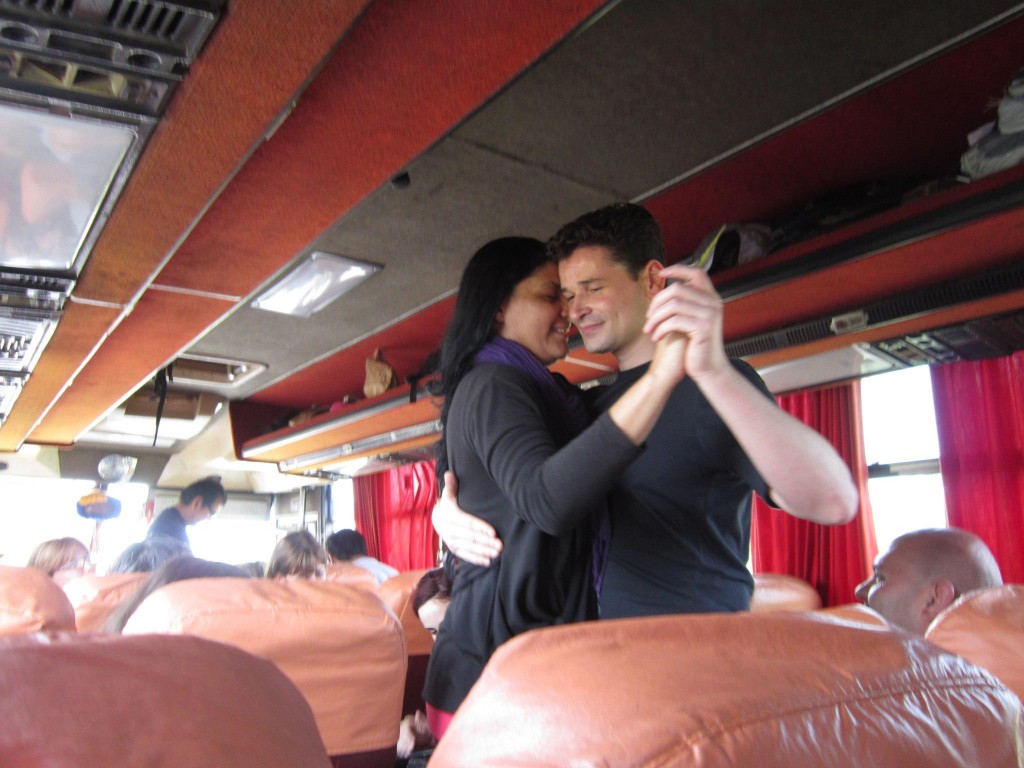 I moved to Buenos Aires to pursue tango at the source two years later in 2012. In Buenos Aires I felt more powerful tangasms because the embrace was more healing, more committed, than in the Bay Area, where the embrace could feel like a faint and technical thing. Dancing in a hug recycles energy between our hearts and creates an all-over-the-body high. I would go to bed after having a tangasm for the night feeling satisfied; the tangasm helped me to wake up happy, still on a cloud of pleasure waking up in the morning, sipping my morning tea.

Tangasms cured my insomnia much better than Ambien.

A tangasm is not a climax in the way we think of an “orgasm.” There is no particular moment of release. The tangasm is not about how it looks, it’s about how it feels. A tangasm is a moment of total connection coupled with full-body pleasure, bodies swirling with each other, breathing together, a union with the moment, your partner, the music, the room. I have asked people about their tangasms and they tell me things like: “Losing all notion of time and space.” “You forget about everything and everyone.” “A peak experience.” “Traveling to another galaxy.” “Thoughts floating away.” “Being in flow.” “Embracing and breathing together.” “Dancing on a pink cloud.” “A spiritual practice.” This doesn’t mean you are sexually attracted to your partner, though you might be. You could feel a tangasm with someone of your same sex if you are heterosexual or even with your parent.

Since there is no climax in the tangasm, in tango, a partner will not ask you expectantly, “Did you come?” There is no particular pressure to get anywhere. The tangasm is based on connection and sensuality rather than climax. This is something I think we can all benefit from in our sex lives too. Climax can be awesome and deep but being focused on a goal can cheapen the ride; when there is pressure about getting somewhere there’s less enjoyment along the way.

During my four years of tango passion, I’ve mostly been single. I have spent many more nights at milongas than I have on online dating sites or going to events where I could find a romantic/sexual partner. There is a saying in coaching circles that we get what we want. We get what we put our attention on. I started to wonder, have I actually gotten what I wanted? Is tango actually better than sex? With tango, not only do I feel pleasure all over my body, I don’t have to worry about condoms, pap smears, safe sex tests. I’m not going to have an unwanted pregnancy.

Looking for hugs in each new partner, I get to “try” many different, new, exciting sexual partners in one night with no negative consequences. In tango, we dance tandas (four songs with one person). Each tanda is like a one-night stand. At the end of the fourth song we say goodbye and thank you, and if I am in Buenos Aires, the man might tell me that I am wonderful, beautiful, divine as he escorts me back to my seat.

I told one woman about the tangasm and she looked at me quizzically, “Better than sex, really?” I could tell she was saying, Let’s not get carried away.

Then she went and googled for a “sexy tango” video and said she understood. She said, “As I was watching, things that stood out to me as especially sensual were the way he runs his fingertips along her arm, the way she slides her hand up his chest, the tension of their mouths being so close without kissing, or the forced control of both of their bodies when he does the slow dip.” I watched the video and saw she might have misunderstood.

This was stage tango, not social tango. In social tango, what I and most non-performers dance, a partner would not caress your midriff in a gratuitously sexual way. Near-kisses would be against the rules. In social tango, we draw the fuzzy line between sensuality and sexuality so that we can dance with so many partners, including strangers. “Social tango” is much more about the internal experience of sensuality generated through the embrace. In other words, if you go out to a Buenos Aires milonga to watch social tango, you will not see the explicit sexual caresses, but you will see the bliss in the little upturned smiles of the women dancing with their eyes closed and in the focus of the men.

Sex is usually without limits. It has no structure, no time limit. In tango, we dance four songs. Done. Goodbye. Tango offers a structure where you can experience a sensual connection with someone, and then another someone, and not cross the line into explicitly sexual. Boundaries create safety. Limitations create thrills. And variety.

For example, this video is an (exquisite) performance, but it’s more on the wavelength of the tangasm I’m talking about. . . sexual but much more subtle.

Would you give up sex or tango?
Don’t get me wrong. It’s not that I don’t love sex. I am very pro-sex. I love sex. There is a potency and beauty in sex, penetration, and intimacy mixed with love, or even without love, that is distinct.   And yet, I started to wonder if I I had to give up sex or tango for the rest of my life, which would I give up? I started to ask a few dancer friends which they would choose.   After a tanda, Karen, one of my favorite “queer” tango dancers (a woman who dances the lead), told me, “I don’t want to live in a universe like that. Just the fact that you have tango and sex together in this sentence says something.”  ”What?” She wouldn’t say it.  ”You mean that tango feels very good,” I said.   “Yes,” Karen said, smiling.   Is tango always better than sex? No.

Four years later after the first tangasm, I have a boyfriend who does not dance tango, and I find myself staying home with him often rather than going out to dance. Tango is not always better than sex. It depends on the partner, the connection. On the other hand, I am still going away to Buenos Aires for three months and leaving him to dance tango at the source because the true tango embrace is that powerful. I need my dose.

In the end, Karen is right. One does not want to live in a universe where you have to give up either tango or sex. 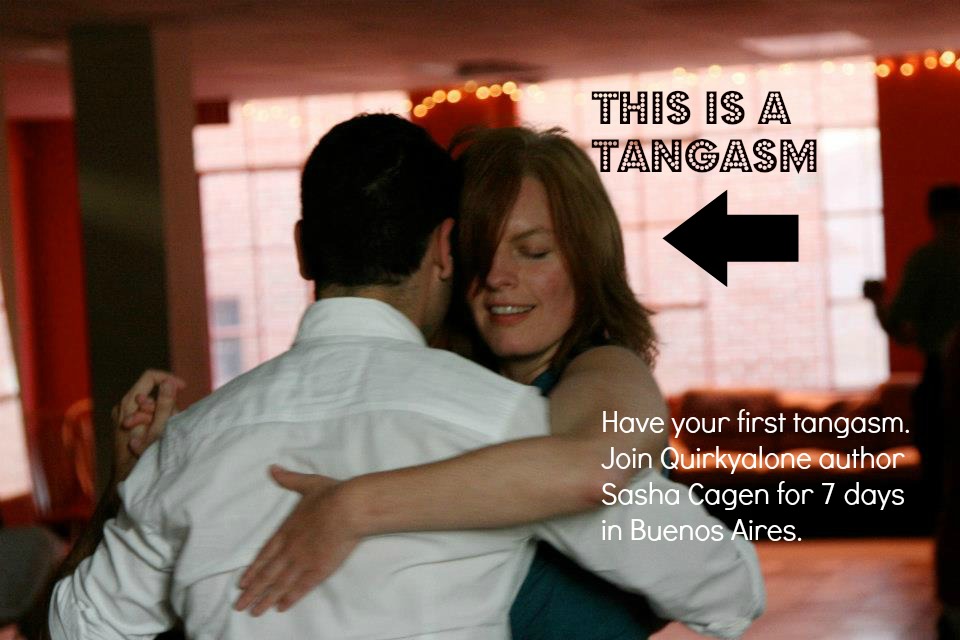 Is tango better than sex???
Decide for yourself in an upcoming 7-day TANGO ADVENTURE in BUENOS AIRES.