A deep conversation about life with Frank Moore

The performance artist Frank Moore invited me to “talk deeply” with him on his cable-access show The Shaman’s Den after I wrote this blog post reviewing his interactive show, Uncomfortable Zones of Fun. The email came the day after Christmas. To be honest, I was scared.

Frank Moore is an extraordinary man. He may be the quirkiest man I know. He’s accomplished so much even though he is severely “disabled.” He can’t talk or walk, but he has hitchhiked across the country alone, written books, directed plays, directed, acted in and edited films, regularly gives poetry readings, plays piano, sings in ensemble music jams, and continues to lead bands in hard core punk clubs despite having severe cerebral palsy since birth and never being able to walk or talk. He jokes that he gets more sex than most non-crippled men. He has something very powerful going on, and I wanted to know more about what that is.

Frank’s show promises it “will arouse, inspire, move, threaten you, not with sound bites, but with a two hour (usually longer) feast of live streaming video. You might get an in-studio concert of bands from around the world…or poetry reading…or an in-depth conversation about politics, art, music, and LIFE with extremely dangerous people! But then you may see beautiful women naked dancing erotically. You never know, because you are in The Shaman’s Den with Frank Moore.” I certainly wasn’t going to dance naked erotically online and did not want people to think that’s what I am about!

I told my new friend Michael, a science journalist and all-around inquiring mind, about the invitation, and he wanted to come. Emboldened by his company, I said, “Let’s do it.” I felt that it is symbolically important to do this interview; there would be a lot to learn from such a fearless and creative person.

By pushing ourselves out of comfort zones, we grow.

There is no complaining in Frank Moore’s world. That is what makes this rebel “cripple” performance artist, creator, and radical who has cerebral palsy so compelling—and why I wanted to do this interview. There are many fascinating twists in this conversation, and I recommend you watch the whole two-hour shebang. Your mind will be blown if you give this video your attention.

For me, doing this interview was like going on a trip, with no drugs. The video will challenge your patience as Frank slowly communicates. He “speaks” by using his red headlight on his forehead to point to the colorful keyboard-meets-Ouija board that sits on a tray on his wheelchair. He designed the keyboard with letters and his most commonly used words. He slowly picks out words and letters that Linda, who is sitting next to him on an exercise ball, reads aloud. He uses a tool that emanates from his forehead to paint and type. Frank made that painting that is sitting behind us.

How can any of possibly complain about obstacles to doing the things we most want to do when there is a human being like Frank who can’t speak or take care of his own basic needs, and has managed to live such a rich life? Frank does nothing for money, and only does the things he truly wants to do, so I knew there would be juice for me (and possibly you) there.

Frank is sharp. His questions often left me stumped. He asked questions like “How did you get started in your life?” (Not your work, but your life. . . )”When did you discover the power of quirky?”

After he interviewed me, I interviewed him, and my questions elicited an oral history of Frank’s beginnings: how he got started on his adventures as a teenager in a wheelchair who could not speak or walk. Totally dependent on others to meet his most basic needs, he set off across the country hitch-hiking to go to communes in Arizona, Massachusetts, and then back to California. Wherever he went he attracted people to him. Despite the “ugliness” of his appearance, and his incredible need, he radiates a powerful freedom from fear and a curiosity about others. He has a way of “seeing” people at their deepest essence level. There were plenty of difficult times along the way, but he kept going with the help of others.

Frank suggested my answer is “a fulfilled person.” I believe in the fulfilled individual—and the process of people being courageously honest enough to ask them what fulfills them. A fulfilled individual needs connections with others even if those connections don’t fit the model of a conventional romantic relationship. I’m still figuring out what replaces the conventional couple. I’m going to start researching quirkytogether relationships that offer us more freedom and flexibility to be who we really are (and I will be looking into that more soon for a future book) and I’ve always pointed to our significant others (plural) friendships and important family relationships.

Frank has a clear answer. Each word weighs a lot when it takes a lot of effort to express. For Frank, the replacement for the couple is the tribe: people living communally, or at least nearby, supporting each other, melting into one another. Melting is a big word for Frank.

Frank and Linda live with four others. Over the last four decades, their Berkeley community consisted of five adults raising two children. The children were encouraged to not favor the biological parents and see them all equally as their parents. Some people might call it a commune; they call it a tribe.

When they moved on to their street in North Berkeley, they met Betty, an older religious woman who went to church often but who reached out to them and even wanted to see their sex tapes (a big part of Frank’s work is about exploring what he calls nonlinear sex, or “eroplay”). Betty liked their vibe of love and communal living and they became friendly. She became part of the tribe, though she lives in her own home. 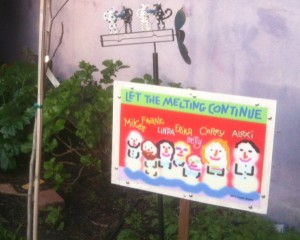 When Betty’s husband died, she was not able to take care of herself. Frank’s gang started to pop in and bring her meals daily. Without their assistance, Betty might be in a nursing home. Living independently in one’s home (as opposed to living with family or in assisted living or worst yet, a nursing home) is almost always the preference for elderly adults. The fact that Frank’s tribe has kept Betty at home is huge: this relationship makes an enormous difference in the quality of her life.

Betty is receiving so much love because she reached out first to Frank’s tribe, even though she is a church-going lady and they are known for sex performances and so incredibly odd. Her reaching out fascinated me. How many of us complain that in modern American society we don’t know our neighbors? That this is a lonely, atomized society?

The responsibility always starts with us to create our own communities and realities. When we act like Betty and reach beyond our individual self-encased bubbles to show interest in others, we never know how much connection we can build. We get to know each other at a much deeper level beyond the surface differences of our costumes and lifestyle choices.

Frank calls it “melting,” an idea that honors our connectness first, that we are not separate. His life has been dedicated to “melting.” I asked him why he had made all this art and done all these performances and he said he did it all in pursuit of this kind of intimacy and depth of connection with other people. I found that fascinating that his “career” was not about the art itself but about the relationship that he has created with others. I can relate, because I always want to tap into others at their depths, to pull away the veils of our exteriors and experience each other in what we are really feeling and thinking.