Write a Relationship Resume to Combat Your Single Shame 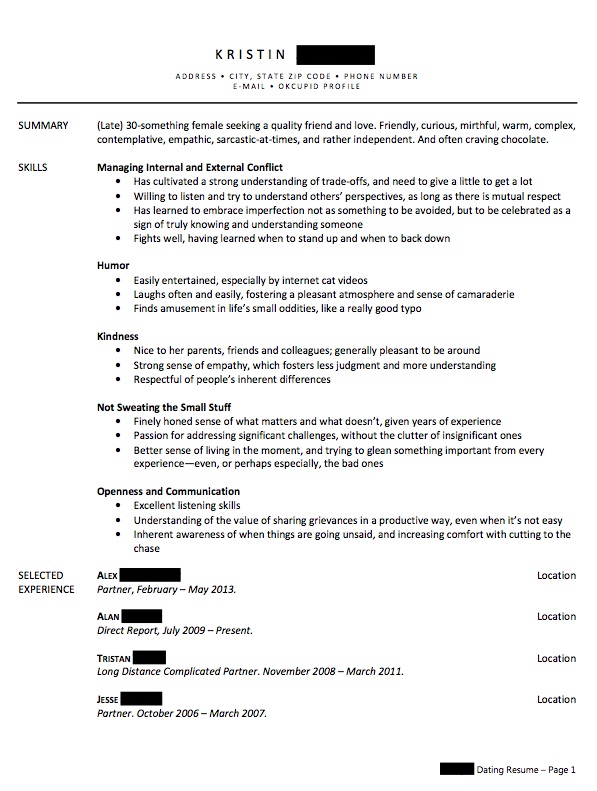 Today, half of U.S. residents are single, and a third of all households have one occupant. Despite this fact, many people still struggle with “single shame”—the sense that there is something wrong with them because they are single.

It doesn’t matter what your relationship history is, you have the power to create the relationships you want now. But first you need to release the single shame that’s blocking you–so you can share yourself more fully, set a clear intention for the life and relationships you want, and learn new skills for healthy communication.

Single shame has been a huge topic in the quirkyalone community this year in my conversation with Sara Eckel, author of It’s Not You, and in my coaching practice with quirkyalone women. Quirkyalones might feel they have been single so long they don’t know how to *do* a relationship, or they lack clarity about what they really want. They may fear they will lose themselves and their freedom–or that a quirky relationship is not possible.

Underneath these thought patterns, usually some kind of shame is lurking and blocking the unfolding of love within yourself–and with another. Single shame tricks you into thinking you are not worthy of connection.

Quite literally, single shame holds quirkyalones back from dating.

It is powerfully healing to work through these blocks with my clients.

I hold coaching as a creative space, and creativity comes out of the coaching process. One of my quirkyalone coaching clients Kristin came up with a fabulous idea through our sessions. She decided to write a skills-based relationship resume as a way to counter the internal critic voice telling her she didn’t have the skills or experience to date. I loved this idea so I asked Kristin if I could interview her to share this tactic with you.

She generously agreed, wanting to bolster the voices of quirkyalones everywhere and beat back the scourge of single shame!

How was single shame showing up for you in dating or not dating? What has it been like to talk about it with me and voice those feelings of single shame?
You know, I honestly don’t think I had really internalized how much my single shame was affecting me and my willingness to dive back into the dating game. I’ve never been super inclined to do things I’m not good at (which is goofy, because usually the only way to get good at something is to practice), but dating was the quintessential example of translating past “failures” into overall avoidance…which furthered perpetuated the single shame. Hearing Sasha tell me just how much *she* was hearing that as a hindrance for me was pretty powerful.

What prompted you to write a dating resume?
I got tired of assuming that I don’t know how to be in relationships because I haven’t dated that much. I have fully functional relationships with friends, family, and colleagues–so why shouldn’t that experience count?

Simultaneously, I had been thinking about how the longer you go without dating, the harder it can be to dive back in—much the way it can be to be long-term unemployed. Spurred on by a conversation with a career coach friend, it occurred to me that when you want to highlight skills rather than experience in seeking a job, you create a resume that does just that.

So I decided to reassure myself, I suppose, by creating a dating resume that focused on what I know how to do, rather than when and with whom (and for how long) I’ve learned how to do it.

What’s your favorite part?
The skills section. It was my favorite to consider, and brought me the most comfort throughout the exercise. It was also the part that has stuck with me the most, as you can imagine. I guess my favorite skill ended up being “Managing Internal and External Conflict,” as that’s the one that I’ve worked hardest at over the past few years, and is so critical for relationships.

What is the meaning of “direct report” and “long distance complicated partner” and what made you include those?
Including those was part-and-parcel to realizing that I’ve learned important skills from every interaction I’ve had, whether or not they were official—or even romantic—relationships.

For example, I’m fortunate to have an awesome working relationship and friendship with my boss (I’m his direct report—hence that term), and I’ve learned a *ton* from him about communication and empathy . . . and I have no doubt that will transfer over into my dating life. It already has.

The “long-distance complicated partner” was just that: a guy who I fell head over heels for shortly before moving to different continents, and with whom I corresponded passionately (and occasionally saw) for several years before he finally just found someone else. There have been so many times when I’ve beaten myself up for wasting time on a guy who wasn’t really a boyfriend (even though he often felt like it), but then I realize that I learned a LOT about what I want and what really matters through my interactions and experiences with him.

What made you choose to make it a skills-based dating resume as opposed to a chronological one? What is the value of doing a skills-based resume for someone who hasn’t had a lot of long-term relationship experience or who has a “gap” on their resume?
Chronology is the problem with me; the significant gaps between relationships are what lead to my single shame. So much as you would do if you were being creative in applying for a job, focusing on what you know instead of what you’ve done, I decided to do the same on this resume.

In what ways has writing a skills-based relationship resume helped you move past single shame, and any other blocks you were feeling?
Like many things we’ve discussed, it’s a tool that pops into my head with some frequency – generally in those moments when I’m doubting myself, and need to remind myself just how much I really do know. So while that doesn’t erase the gaps in the resume, it brings a measure of comfort that continues to be valuable. 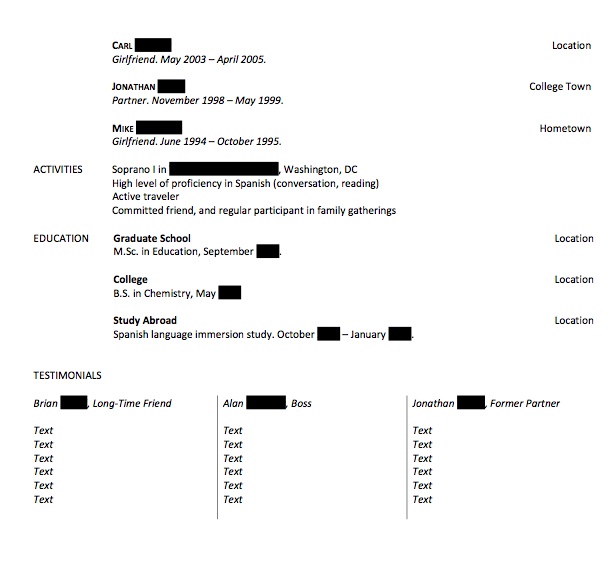 What’s your next step now after writing the resume?
Starting a resume consulting practice! Just kidding. 🙂 Honestly, my next step is having the courage – and curiosity – to just date and learn. And not feel like it’s too late to start doing those things.

What are your tips for those quirkyalones or anyone who wants to write a relationship resume? What do you think a quirkyalone person or anyone grappling with single shame can get out of this exercise?
I’d say this: writing a resume is by definition an exercise in putting your best foot forward, and in that sense, it’s the antithesis of single shame. It’s a chance to build yourself up, to remind yourself what you do well and what you bring to the table, to focus on your strengths – in this case, in relationships rather than in employment. So if nothing else, it’s a reminder to give yourself a break from the single shame if and when you find yourself wanting to stretch your own boundaries and embrace dating a bit more.

I love working with quirkyalone women (and men) clients to help them let go of their single shame through Project Connect, learn how to talk about their dating histories, and create the life and relationships they really want. Click here to learn more about Project Connect and apply for a FREE Breakthrough Session..