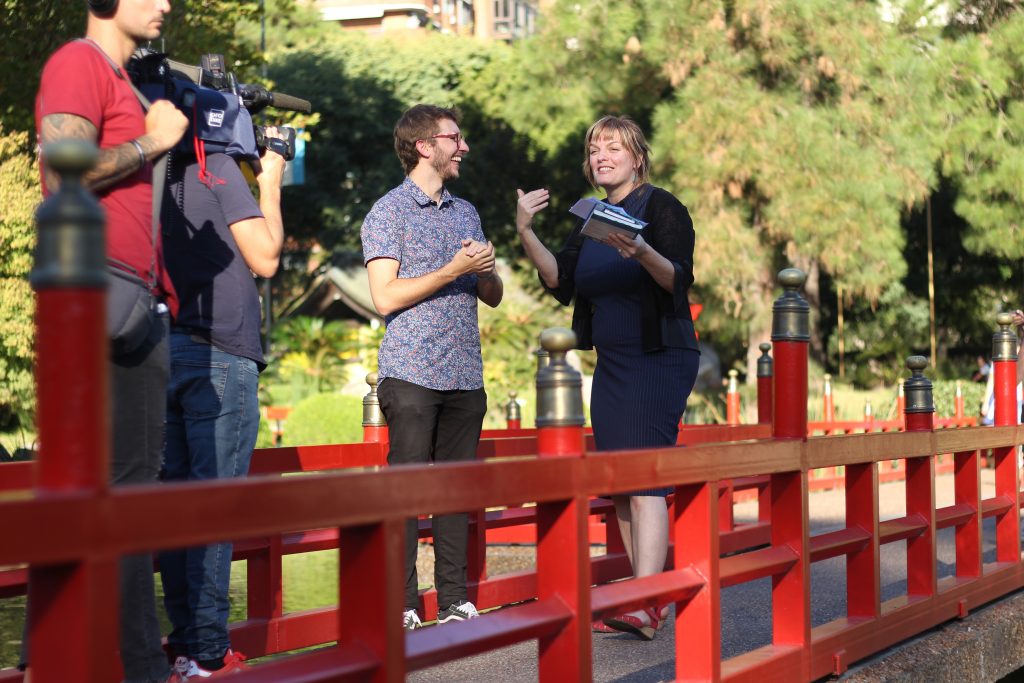 photo by Julia Ribeiro / shot while filming a “nota” for the Argentine news program TeleNoche about self-marriage in the Japanese Gardens (where I married myself in 2014!)

What happens when a national news program in Argentina wants to know about the American woman who married herself in Buenos Aires? That happened this week. The interview was all in Spanish. Oh my god, it was amazing! We shot this very entertaining video in the Japanese Garden in Buenos Aires–exactly where I married myself five years ago!

This interview was a chance to spread the concept of self-marriage as a ritual of self-love and -acceptance in South America in Spanish on the biggest nightly news show in Argentina TeleNoche. Since then I have gotten lots of media requests from radio stations and newspapers in Argentina.

Just as a reminder, self-marriage does not at all imply or require being single. I’ve helped married and single women marry themselves in my coaching practice.

I also want a loving committed, interdependent relationship with a man. That’s the vulnerable part of me that might not get seen in my advocacy for self-marriage or Quirkyalone. If that sounds contradictory, so be it–it’s really not not. Loving ourselves helps us love other people. Being kinder to yourself helps you look at a a loved one, a friend, or strangers, with a softer, more loving gaze. I can’t say that marrying myself made me a perfect person, but the ring is always a reference point to remember the way I want to treat myself and others.

That’s the deep side of self-marriage. There’s also a hilarious side because marrying yourself can be pretty fun. With Jason Mayne of TeleNoche I was able to be more myself than I am in most interviews.

When I talked about Quirkyalone with Anderson Cooper on CNN the interview felt like a battle. When you go to battle you’re tense. When you’re joking you can be more relaxed. Maybe it’s was Jason’s sympathetic genuine millenial vibe, that we were in a park, or that I was speaking in a foreign language. Anyway, he managed to bring out the best in me. We had so much fun!

Watch the video and let me know what you think.

For those of you who don’t speak Spanish, my team and I translated the interview.

Jason: And this ring, what does it mean?

Sasha: Well, it’s a commitment to myself, that I’ve taken that step of marrying myself.

Jason narration: There is a movement that grows in the world that is called sologamy or self-marriage, people who marry themselves. And one of the references is now in the city of Buenos Aires. Let’s go talk to her because I want to know what this is about. How is it that you marry yourself, is it a traditional party? No? Well, here we’ll see.

Jason: Very good! I want to see this, what you have here. Is it a commitment ring?

Sasha: Oh well, yes, it’s my commitment ring with myself.

Jason: What does this ring mean?

Sasha: Well, it’s a symbol of the fact that I took this step to marry myself. As a symbol of self-love and self-acceptance.

Jason: And how long have you been married?

Sasha: It’s been five years. We’ve been together for 5 years!

Jason: Where did you get married?

Sasha: Here, in the Japanese Garden.

Jason: Where are you from?

Sasha: I’m from the United States, I fell in love with tango, I moved to Buenos Aires, I decided to marry myself and I did the ceremony here in the Japanese Garden.

Jason: And does it have something to do with not expecting the prince and going against all that societal pressure of marriage?

Sasha: Yes. I was going to be 40 years old and I had not married a man yet and I wanted to do something for myself, a ritual. About being an adult, being a woman, taking charge of my own happiness. And also my self-acceptance, that’s a very profound thing.

Jason: Did you tell your friends, your family that you were going to marry yourself? What did they say to you?

Sasha: Well, I told very few people, because I knew that most people would not understand. My mother told me, whatever is good for you is good for me, but I know she thought I was crazy. And that’s OK.

Jason: So it’s about not depending on sharing moments with another person, its about feeling feeling good being yourself?

Sasha: Yes, and I also like to be in a couple. Getting married to yourself doesn’t mean that I want to be single, it’s not like that. It’s that I want to take care of my happiness, when I’m single or when I’m with someone.

Sasha: For me, what is fundamental is to write the vows.

Jason: You wrote the vows?

reading the vows from five years ago, translated to Spanish

Jason: These are the vows of your self-marriage?

Sasha: My self-marriage yes, because I can also marry a man. it’s not exclusive, it’s very polyamorous.

Jason: The polyamory, I like it, you already stole the concept.

Sasha: Yes, we are in everything.

Jason: Okay, for example, what does it say?

Jason: There it is …

Sasha: I promise to see myself beautiful and accept my sexuality.

Jason: These were the vows of your self-marriage …

Jason: After, for example, was there a honeymoon?

Sasha: Well, there was a day to celebrate with friends, the honeymoon is still coming.

Jason: And marrying oneself is only for women?

Sasha: No men can also marry themselves. 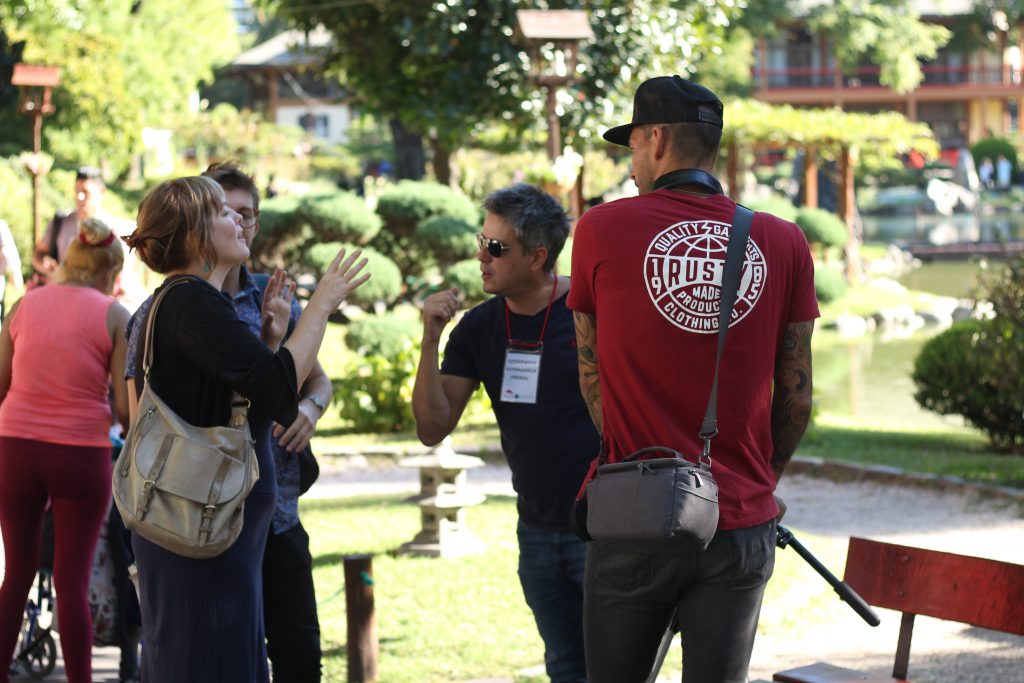 Making some very important point about self-marriage to the crew!

Sasha: In 2004 I wrote this book (Quirkyalone: A Manifesto for Uncompromising Romantics), and this book is the first place where there was published writing about self-marriage in a book. I did interviews with other women who had done it (married themselves) in California.

Jason: At what time did you say I want to marry myself?

Sasha: That was some months before my 40th birthday, I was very anxious.

Jason: How is the wedding ritual?

Sasha: Yes, there were many cases when women who wear the white dress and do the whole party. Everything.

Jason: You got gifts for self-marriage?

Sasha: There were gifts that were very sentimental, but not a lot of money. My self-marriage was very inexpensive, very economical.

Jason: Are there companies that offer self-marrying services?

Sasha: There are a few. There’s a box you can buy from the internet to help you with your process, and I see it as very economical, compared to the United States. Getting married in the US is very expensive, and we see what happens in many weddings and for me here is something very economical option that will help you a lot. And you’ll never divorce yourself.

Jason: So more economical, and you won’t get divorced if you marry yourself!

Sasha: Yes! And you’re free to do what you want.

Jason: Could it be that this is the key to happiness?

Sasha: It could be, yes!

Jason: Since you didn’t do something . . . as part of the production. (Takes out fake bouquet of flowers.)

Jason: Here we throw the bouquet of flowers to the back.

Sasha: For the next. Let’s go. (Throws bouquet backwards to Jason)

Jason: Yes! I never thought this moment would arrive and it arrived.

Sasha: I’m so happy for you.

Jason: Now the only thing that is missing is the ring and I’m all good. And the honeymoon. 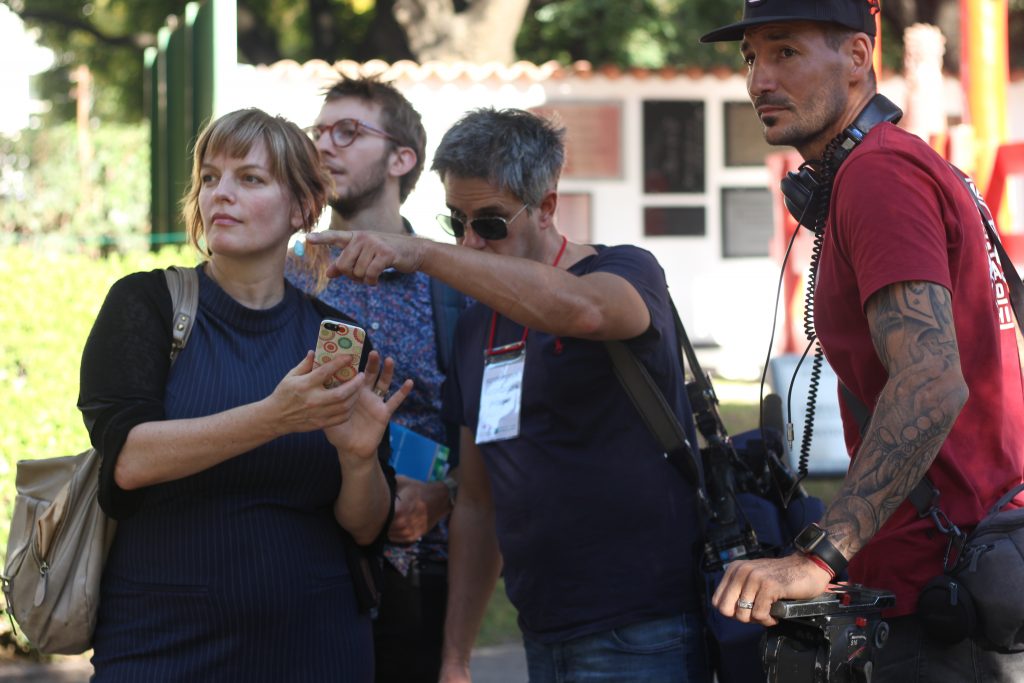 Analyzing the light and where to shoot – these guys were hilarious. The tattoed sound guy thanked me and said my story would help him get his mother off his back because he could tell her he was marrying himself.

Are you ready to come marry yourself in the Japanese Gardens in Buenos Aires? Or in some other beautiful spot in this city, or in your own city? It’s all possible! I do help women and men, single or already married, marry themselves through my coaching practice so if you want some support to take this step yourself, you know where to go. Check out my coaching page and request a consult.

My team and I have also welcomed women to marry themselves or do their own personal honeymoon with a Tango Adventure in Buenos Aires. If that gift to yourself appeals to you, check out the Solo Chica Tango Adventure. With Solo Chica you will not be solo long, just like when you marry yourself you might attract better offers after you take a stand for your own self-worth!

Sign up for Sasha's newsletter to get her blog posts

I'm a master life coach who has been working with high-achieving women to help them show up as their most authentic, powerful selves since 2013. I'm also the author of the cult hit book Quirkyalone: A Manifesto for Uncompromising Romantics (HarperSF) and To-Do List: From Buying Milk to Finding a Soul Mate, What Our Lists Reveal About Us (Simon & Schuster). The best way to stay in touch is to sign up for my newsletter, the Sasha Cagen Weeklyish.

You're not alone. You're quirkyalone. My weeklyish newsletter the Sasha Cagen Weeklyish goes out to 5,000 quirky souls. Sign up to get inspiration to never settle, love yourself, and live a quirky life you love. You'll also get access to the quirkyalone quiz.