When Secret Single Behavior Is No Longer Secret

This year’s Bay Area Quirkyalone Day party was a wild card–and in the end, awesome.

For the last two Quirkyalone Days, I was away in South America. This year, I decided, let’s bring IQD back. I nailed down the venue–the gorgeously quirky, gauzy Cafe Van Kleef in Oakland– just two weeks before. I hoped that Malcolm, our IQD mascot, would come. Malcolm is a former Googler and wacky soul who has come to every single IQD since I started hosting them in 2003. Would anyone else show?

The quirkycrowd of all ages showed up, in their glory. This was the ninth annual IQD the longer I throw these gatherings, the more I fall in love with the people who come. They are totally open-minded, with good hearts, and ready for anything.

The highlight of the evening was the spontaneously organized Share Your Secret Single Behavior Contest. My longtime quirkyfriend Kenneth helped me create the contest, totally improv and on the fly, which is my favorite way to collaborate. Secret Single Behavior was the theme of this year’s IQD. SSB are those weird behaviors that you indulge when you are alone–and that you don’t necessarily don’t want a significant other (or a rommate) to know about. I wrote about SSB in Quirkyalone in the chapter “Loneliness vs. Solitude.”

Kenneth went to buy notepads and pencils and we distributed them to people in the crowd, asking them to write down their quirkiest SSB on one side, and their names on the other. My friend Amrita, Malcolm, and I read the SSB and invited the audience to applaud for the weirdest ones. Kenneth was the judge.

Here were some good ones:

“Eat ice cream with Kahlua on it in the bathtub without feeling cramped or pressured to share”
“Dance naked, while singing into a mirror”
“Reclean the kitchen after my roommates cleaned it”
“Talk to myself and my cat”
“Fart really loud and long at night (especially during my period)”
“Make sounds that no one in the world makes or has ever made”
“Read random discussion forums about my favorite TV shows and ones I don’t watch”
“Talk to stuffed animals”
“I walk around the house wearing nothing but underwear on my head”
“Getting a pet” (This one is a little weird–I mean, how many times do you go get a pet?)

The winning SSB was stunning in its no-hold-barred go-for-it quality: “When I am too lazy to go to the bathroom in the middle of the night, I frequently urinate in a pint glass and toss it out the window.” 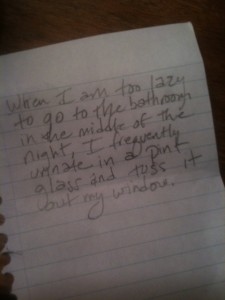 Carly wrote the winning entry. She blew us all away with her candor. She is so sexy too. This combination is killer. Such potency! She should have her own TV show, something like “Girls Behaving Badly” but even better.

“How are you even able to get it in the jar?” I asked, “I got good at peeing in a jar on lots of road trips,” she told me.

The prize was a Greyhound, a grapefruit cocktail Cafe Van Kleef is famous for. Carly doesn’t drink alcohol. Instead we got the bar to make a yellowish drink: a mix of lemonade and ginger ale.

These quirkyalone events are so fun I would consider doing more of them–but at the same time there is something really special about a once-a-year gathering. When quirkyalones get together the sparks fly.