Quirkyalone (and I) Stand with Black Lives Matter 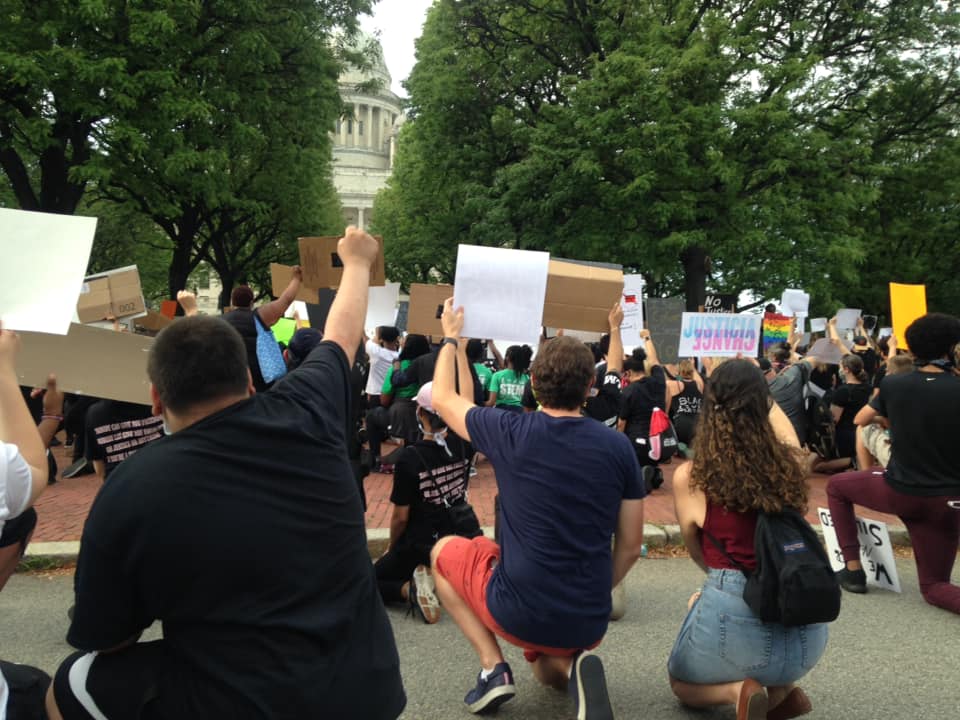 I have been sitting with the question of what to say in support of Black Lives Matter in a message to you for about five days now. I attended a Black Lives Matter protest with my father in Providence, Rhode Island last Friday (the city where I grew up). (All the demonstrators I saw wore masks, and we did too. We kept distance at the back of the march since my father is 73, and I don’t want to get the coronavirus either!)

I wanted to write an essay about going to the Providence protest during the pandemic. I started, but I haven’t finished. I am a slow writer in general.

While I like to write from the “I” about what I see through my eyes, I didn’t want to fall into the trap of making this about me, because this is definitely not about me.

What’s happening now to protest George Floyd’s murder at the hands of the Minneapolis police is about something very big, about our common humanity and the experiences that black people have been going through all their lives while white people like me get to sit in relative safety and comfort.

I don’t have to worry about my safety while driving, sleeping, jogging, and existing the way black people do. If I haven’t said it before out loud, I acknowledge my white privilege.

So this morning I want to send you a short message that says simply:
***Quirkyalone (and I) Stand with Black Lives Matter.***

My work as a writer and coach doesn’t end with Quirkyalone, but it started there, and that’s how many of you came to know me. Quirkyalone is a word and concept that seeks to uplift people to know you are good enough just where you are, whether you are single, married, or anywhere in between. That includes everyone, not just single white women in their forties.

Once about two years ago someone posted on my Quirkyalone Facebook page, how come you don’t acknowledge gay people? I felt defensive. I wrote about sexuality and gayness in Quirkyalone.

Year later after the initial sting wore off, what I take away from her comment is this:

It’s important to say out loud what we feel in our hearts. What we assume everyone already knows may not obvious.

I stand with Black Lives Matter because an injury to one is an injury to all. Because there has been a system of racial inequality in the US and around the world that has benefited white people economically and in so many other ways that has been terribly harmful for black people. This system of racial inequality that touches pretty much every aspect of our lives *must* change.

Change is not an overnight process. Black people and their allies have been fighting for liberty for centuries since the dawn of our country. I am hopeful as I listen to the voices who are emerging now calling for real, meaningful change. More people are listening. And the only way real change happens is through social movements–when people come together to demand change. The powers that be do not roll over and give out reform without a push from the people.

For years, organizers in Los Angeles and Baltimore have been holding weekly vigils to mourn black men and women murdered by police and to call for change. Those gatherings were often small. Now the streets are overflowing, even in my small state of Rhode Island. This time people are coming back day after day. Young people are learning how to organize protests. High school students organized the protest in Providence, and their hard work showed–they did an amazing job.

Here is a great New York Times story about why and how the protests are different–more durable–this time (compared for example, to what happened after Ferguson in 2014).

I know everyone doesn’t subscribe to the New York Times, but I’m sharing this link anyway in the hopes you can read it.

(And by the way, subscribing to your local newspaper is another way to help–we need journalism now more than ever to understand our world and each other.)

Here is the beginning of the Times story “Other Protests Flare and Fade. Why This Movement Already Seems Different”  to give you a flavor.

“Ever since people across the country began pouring into the streets to protest police violence, Dakota Patton has driven two hours each day to rally on the steps of the Colorado State Capitol. He has given up his gig jobs delivering food and painting houses. He is exhausted. But he has no plans to leave.

For all of you living this intense moment, I send you love and care for your well-being.

I’ll be back with more.

If you have any suggestions for me I’m always open to hear.

With love for all,