Hold it in your hands: signed, collector’s edition copies of To-Do List magazine 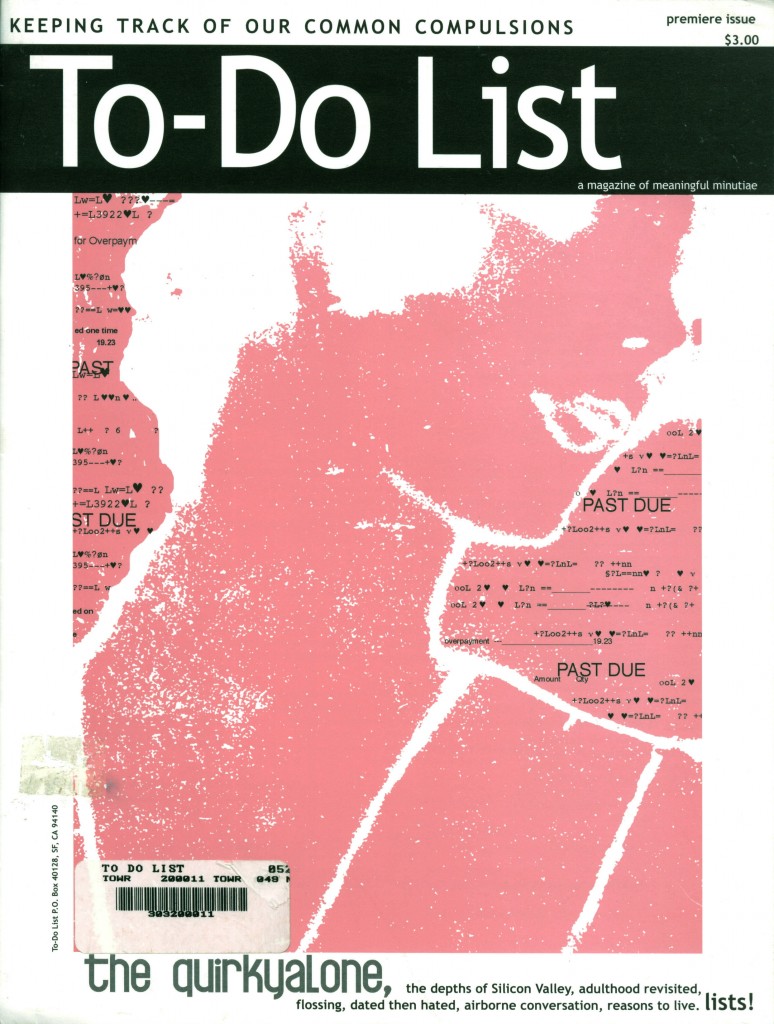 Before moving to Argentina to dance tango and start the Tango Adventure, before becoming a life coach serving my quirkyalone readers, before writing Quirkyalone: A Manifesto for Uncompromising Romantics, I published and edited a print magazine.

To-Do List was a magazine of meaningful minutiae that published essays, interviews and art using the idea of a to-do list as a jumping-off point to explore the details of modern life.

In anticipation of the first issue I placed an ad in Bitch magazine asking people to send me their to-do lists in the mail.

Much to my surprise, thousands of people took me up on the offer. I discovered the delightful experience of visiting a PO Box in San Francisco, opening the postal box and finding handwritten to-do lists from strangers.

Much like The New Yorker uses cartoons as its signature artwork, To-Do List used handwritten lists. The lists are stories in and of themselves, a snapshot of humanity, wants, dreams, neuroses, obsessions, capacities and incapacities.

To-Do List won Best New Magazine in Utne‘s Alternative Press Awards in 2000 and eventually led to the publication of my second book, To-Do List: From Buying Milk to Finding a Soul Mate: What Our Lists Reveal About Us.

Several fans of the book recently emailed me to ask about getting copies of To-Do List magazine.

We have a limited number of copies of the magazine which we offer now to you as signed, collector’s-edition copies. The longer this “digital revolution” goes on the more I value things I can hold in my hands, especially books and magazines. Maybe you do too!

These limited-edition copies will be mailed out in September 2018. September because I’ll be back in the U.S. in September–so that allows me and my elves to mail them to you that month.

To take advantage of this special offer to get To-Do List magazine order by September 15, 2018.

This offer is only good for U.S. mailing addresses–sorry international readers! (But you can get a Kindle version of the To-Do List book no matter where you live.)

There are very few copies so if this sparks your interest for yourself or as a gift, reserve yours now.