Going Door to Door in Reno, Nevada: One Fascinating Interaction After Another 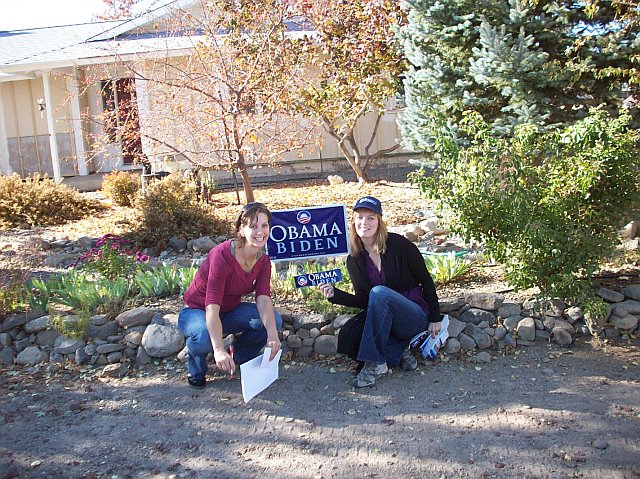 So if you want to read about the fascinating interactions I had with voters in Reno, Nevada, 11 days away from the election, read on.

As they say, the family that campaigns together stays together. This year, my father and I traveled to two states to canvas for Obama. First we did a weekend in Oregon, where we helped recruit voters to one of the largest rallies of the campaign (80,000).

This time, my father, sister, and I met in Reno to campaign for Obama during the second-to-last weekend before the election. Our timing was once again amazing–Obama spoke in Reno on Saturday, his first rally of three that day.

With only 11 days to go until the election, the energy at the Reno rally of 11,0000 people was high. Picture a very wholesome crowd doing the wave in the bleachers before he arrived, and incredible anticipation as his motorcade arrived. After we streamed out, we drove to the volunteer office, where we were dispatched to a strip mall in the suburbs.

We got our assignments: detailed sheets with names and addresses of Democrats, Republicans and independents with the codes “vote” or “persuade.” “Votes” were supporters whom we were just supposed to encourage to vote early–in Nevada, they can even vote at supermarkets starting in mid-October! “Persuades” were undecideds. We were also supposed to drum up as many volunteers as possible.

We were assigned to canvass one of the wealthiest neighborhoods in Reno, where people lived in sprawling, architecturally inventive homes on large lots with stunning desert views. Canvassing is tiring work, but when people are home, it can also be one fascinating interaction after another.

Here are some snapshots of the most interesting people we met.

The first visit was probably the most gratifying. An eighty-something woman answered. She can only be described as lovely and hilarious, the kind of woman who the Today Show would feature as having a 100th birthday. Was she going to support Obama? “Oh yes!” Why? “Not only is he by far the best candidate, McCain is such a toad.” That had to be the best line of the day. McCain is a reptile.

We were supposed to ask supporters if they wanted to volunteer, especially during the week.Well, she couldn’t walk so well, but yes, she could so some office work. She and her husband had been requesting signs for their desert lawn. They lived in a Republican neighborhood. They were THRILLED that we were going to place a sign in their front yard. We were exhilarated after our first visit and took pictures by the newly planted sign.

We met a number of other Obama supporters who were very excited to get their hands on lawn signs to counter their neighbor’s McCain signs. Things were going absurdly well, until, the attack of the coded racism. . .

We were walking along in one of Reno’s most pristine and wealthy suburban enclaves. The people were so lovely and friendly and willing to take five minutes to chat, so unlike the city where we are all so busy, busy, busy. Yet that didn’t mean they agreed with us.

One woman walked out of her driveway where she had been raking leaves. She was probably in her late fifties or early sixties, blond and attractive in sweater and jeans. Well, she just still didn’t know anything about Obama. . . which seemed odd. Where had she been for the last three debates?

She wanted to know, Was Obama an American citizen? We assured her that he was born in Hawaii, and yes he was. What about Reverend Wright? What about Bill Ayers? What about those “associations”? She didn’t like McCain either. My father had a strategy. “I want you to vote for Bob Barr,” he told her after ten minutes of going-nowhere conversation. “You can send a message that you are not satisfied with either candidate.” She looked intrigued. I was amused he would be so forward as to tell someone who to vote for. He told her Nader was an option too, and she said, “Yeah, I could vote for Nader! I didn’t even know he was on the ballot!”  My father was proud of himself for costing McCain a vote.

A few houses down the road, a woman in her fifties was about to close the glass door before she said, “Hold on, there’s a question that I keep asking your side and I never get an answer. I believe that ministers are teachers. What was he doing going to that church for twenty years? We went to a church where we didn’t agree with the minister, and we switched. Why would he stay where someone was teaching hate?”

Oh my, the whole Reverend Wright thing was tough to respond to. My father tried to take the position that Reverend Wright had done many good things and that Obama had already distanced himself. I told her to look up Obama’s race speech on YouTube, where he tried to talk about the complexities of these issues in a way that politicians rarely do, and that the style of African-American churches is quite different from what she’s used to. None of this worked a bit. I still wonder about how to respond to a voter’s discomfort with Obama over the Wright issue. The campaign tells volunteers to limit conversations to two minutes and to move on from people like this woman, but I’m glad that we had the chance to hear her point of view. She was more rational than a lot of the others who seemed to be, at the end of the day, uncomfortable with voting for a black man.

Finally that afternoon, we met the woman who made my jaw drop over and over again. I wondered if she suffered from a rare mental illness: extreme naivete. Or perhaps being she was in a time warp, when it was still okay to profess that black people are not real Americans.

This woman looked to be in her early sixties, and she lived in a grand home with a huge archway, and a very adorable scarecrow by the door greeting us, “Hello, friends!”  She was a Democrat. Her husband was a Republican. He was out at that very moment early-voting for Obama. But she couldn’t. She told us, “I’m prejudiced. . . ‘ pause. My sister and I were wondering what would follow. And then, “I can’t vote for a black man for president.” The conversation was as pleasant as can be, but she kept dropping these bombs:

We tried to respond in a way that would promote dialogue. That was hard. I think I told her something along the lines of it being good that Barack was black, that it was something to be proud of that we had come so far that we can vote for a black president. I don’t think that really opened her mind. Had she never met a black person? Later we looked up the percentage of black people in Reno. Only 2.59% of Reno residents are black, compared to about 13% nationwide.

The kicker: this woman had been a schoolteacher for 38 years.

How do you spell terr-if-y-ing?

The next day we canvassed about 40 more houses in super-rural Sparks. One of the more interesting discussions came when we finally did meet a black couple. A black man wearing an orange jumpsuit with a DOT logo on it greeted us warmly and called his wife to join us at the door.

He and his kids doing work on their home. He told us later they were facing foreclosure. It turned out that the husband was not so into Obama. Why? Well, he thought that Obama would require employers to give partners of gay men health insurance, and that was going to drive up the cost of employer insurance, and then no one would have it. He seemed to think McCain would favor the same policy, but he just couldn’t vote for Obama. Weird, the guy was being foreclosed upon, but he was hung up on gay men getting health insurance? His wife was a bit more expansive in her thinking.  She said that she might not agree with Obama on all the issues, but he had “the qualities of leadership that we need right now.” We told her it was her job to work on her husband.

My  takeaway from the weekend was: ASSUME NOTHING. People are much more complex than our polls and statistics and predictors would lead us to believe. Husbands and wives necessarily don’t vote the same way, Democrats can be racist, black men don’t necessarily support Barack, and eighty-year-old women may want to volunteer. And no one really likes McCain. The conversations with people who expressed their racism in coded and uncoded ways were distressing, but also useful–it’s better to be looped into reality than to be ignorant of it. And hey, we distributed more than 10 signs to people who passionately wanted to put them up in their desert lawns. There’s nothing better than getting more Obama signs out there in battleground states. Here’s to hoping that each little bit makes some kind of difference.

The Obama campaign still desperately needs volunteers. On the West Coast, they most need them in Colorado. The campaign needs phone bankers to call voters in battleground states everywhere. Learn more and get connected at mybarackobama.com.