Reviving Sensuality in the Digital Age. An interview with Kaamna Live

What is sensuality and why does it matter? Our culture is obsessed with sex. Sex matters of course. But we rarely talk about sensuality. I want to talk about reviving sensuality in the digital age when we are all too often burying our heads in screens.

In this video with Kaamna Bhojwani-Dhawan on her new Internet talk show Kaamna Live I made sensuality a priority in my life by leaving Silicon Valley for Brazil back in 2010. In this interview I explain why I made sensuality so important for me at a time when my life was going downhill in many ways.

That move led me to Buenos Aires and tango. The search for sensuality continues because as I see it I need sensual fulfillment to be happy, healthy, and in touch with what I want and don’t want. Being in touch with my sensuality actually helps me make decisions and feel more worthy and whole. We get a lot of valuable information from our bodies but we can only feel those pulses of information if we are in touch with our senses.

In this interview we talk about why reviving your sensuality matters for your health and well-being, which celebrities are sensual and which are not, and how you can make playing golf a more sensual experience. Ha. And we should not miss the obvious point: giving focus to sensuality will make you a better lover. As Kaamna so wisely points out in the video: Men, take note!

Does sensuality matter for you? How do you trigger yourself to get out of your head, off the computer or your phone and back into your body? Where do you find sensual delight?

Let us know in the comments.

There are plenty of studies on the world’s happiest countries, but what about the world’s quirkiest? I think Brazil would definitely rate in the top five. Perhaps it’s in part because I got to know Brazil better than any other country, including my own, and any country becomes quirky when you travel through it extensively. But I also just think Brazil is a place where people really value expression and creativity is found throughout society in unexpected places.

I was continually delighted by the unexpected art projects I would stumble upon in my travels. Projects without institutional support taken on as an individual mission in a city or out in the middle of nowhere, even, along a highway.

What do I mean by quirky? I mean unexpected, unique, and unpretentious. Totally individual. There is no real equivalent for the word “quirky” in Portuguese. I always carefully explain the word quirky to Brazilians—that it means good weird, not bad weird, which is “esquisito” in Portuguese. It means that you have the courage to be yourself exactly as you are, without trying to be different. Using the example of Amelie often helps people understand the quirky aesthetic, though of course you don’t have to be cute as a button to be quirky or to plant garden gnomes in gardens.

Here are a few of my favorite quirky places in Brazil. 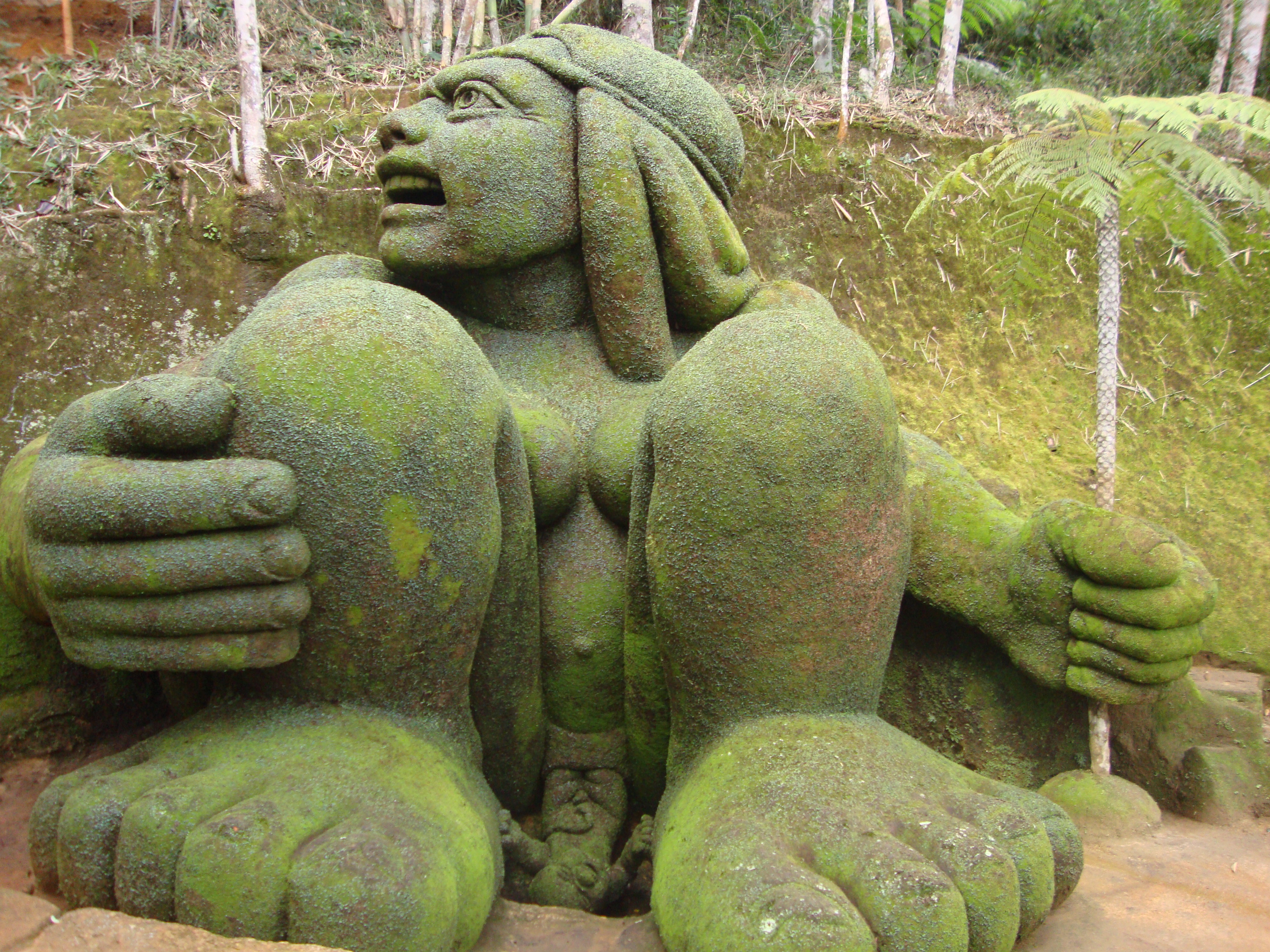 Jardim do N‚àö‚Ñ¢go . Nova Friburgo. Jardim do N‚àö‚Ñ¢go is a sculpture garden with huge moss-covered sculptures of animals and humans, including a particularly spectacular sculpture of a gigantic women giving birth. The artist is N‚àö‚Ñ¢go. It seemed so mysterious how this garden had taken root out in the middle of nowhere, the product of one man’s imagination and solitude. The government recognized him for his contribution to tourism, but I can’t imagine the garden was commissioned. The Jardim is 13 km north-west of Nova Friburgo on highway RJ-130. The garden is part of the Circuito Turistco between Nova Friburgo and Teresopolis. Drive this road and you can stop at waterfalls, a cheese factory, and a museum about Swiss immigration to Brasil. 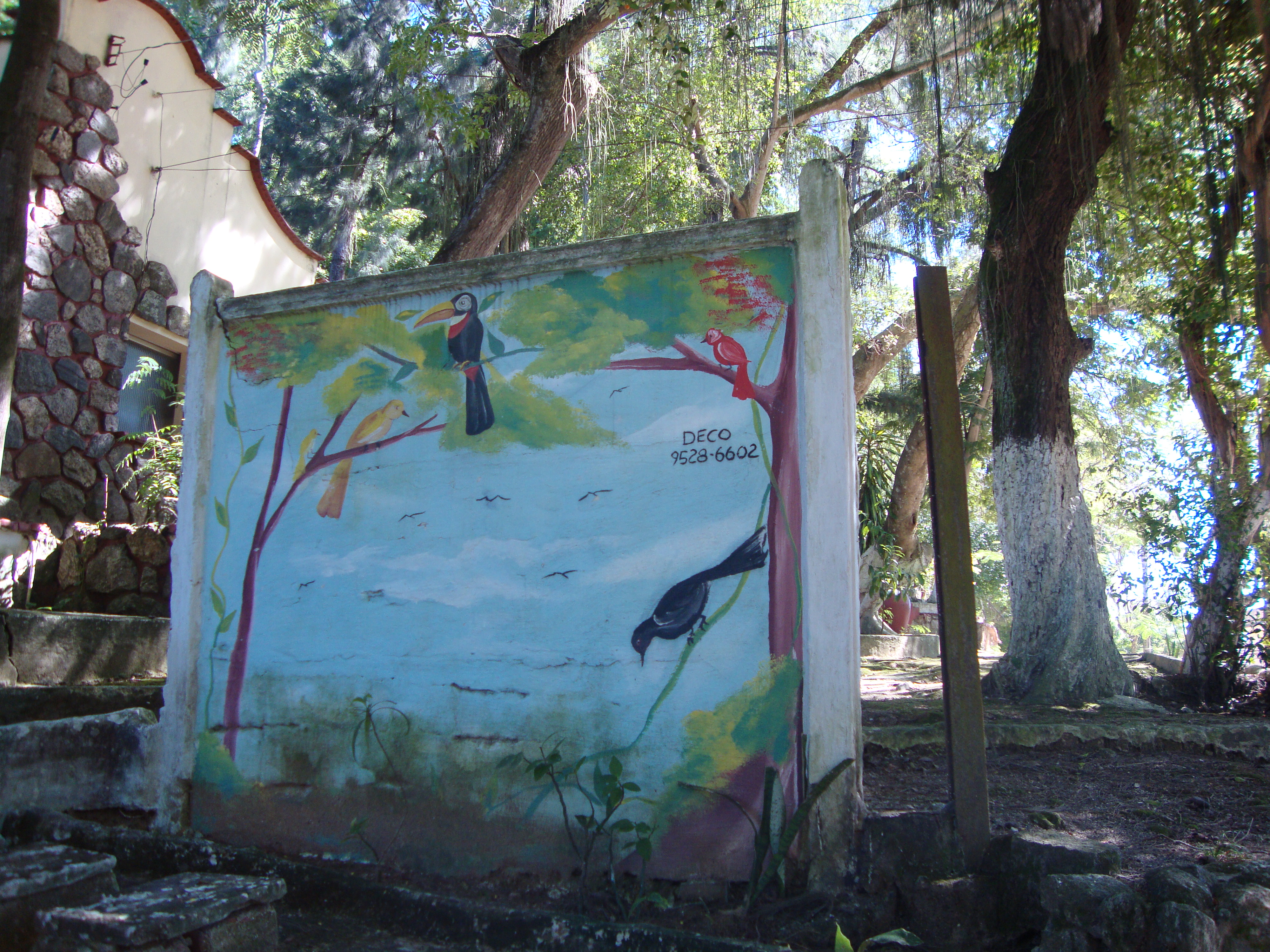 Cemitério dos P‚àö¬∞ssaros (Bird Cemetery) on Ilha de Paqueta. Rio de Janeiro. One week when I was feeling overstimulated by the chaos and noise of Rio I took a friend’s suggestion to visit Ilha de Paqueta on a day trip. Paqueta is just an hour away by ferry in the Baia de Gaunabara, but it feels like another world and time period. There are no cars on the island–only bikes (which you can rent cheaply) and horse-drawn buggies. It was a weekday and I was pretty much the only tourist on the whole island. More than 10 guys asked me if I wanted to take a tour in their bike- or horse-drawn carriages. I finally relented. The tour was worth the price when my driver stopped to show me a BIRD cemetery attached to a human cemetery. My guide told me that people from all over Brazil bring their birds here to rest, and that the bird cemetery had been a personal project of its creators. The fact that someone had a vision for a bird cemetery and went ahead and created one made me happy. 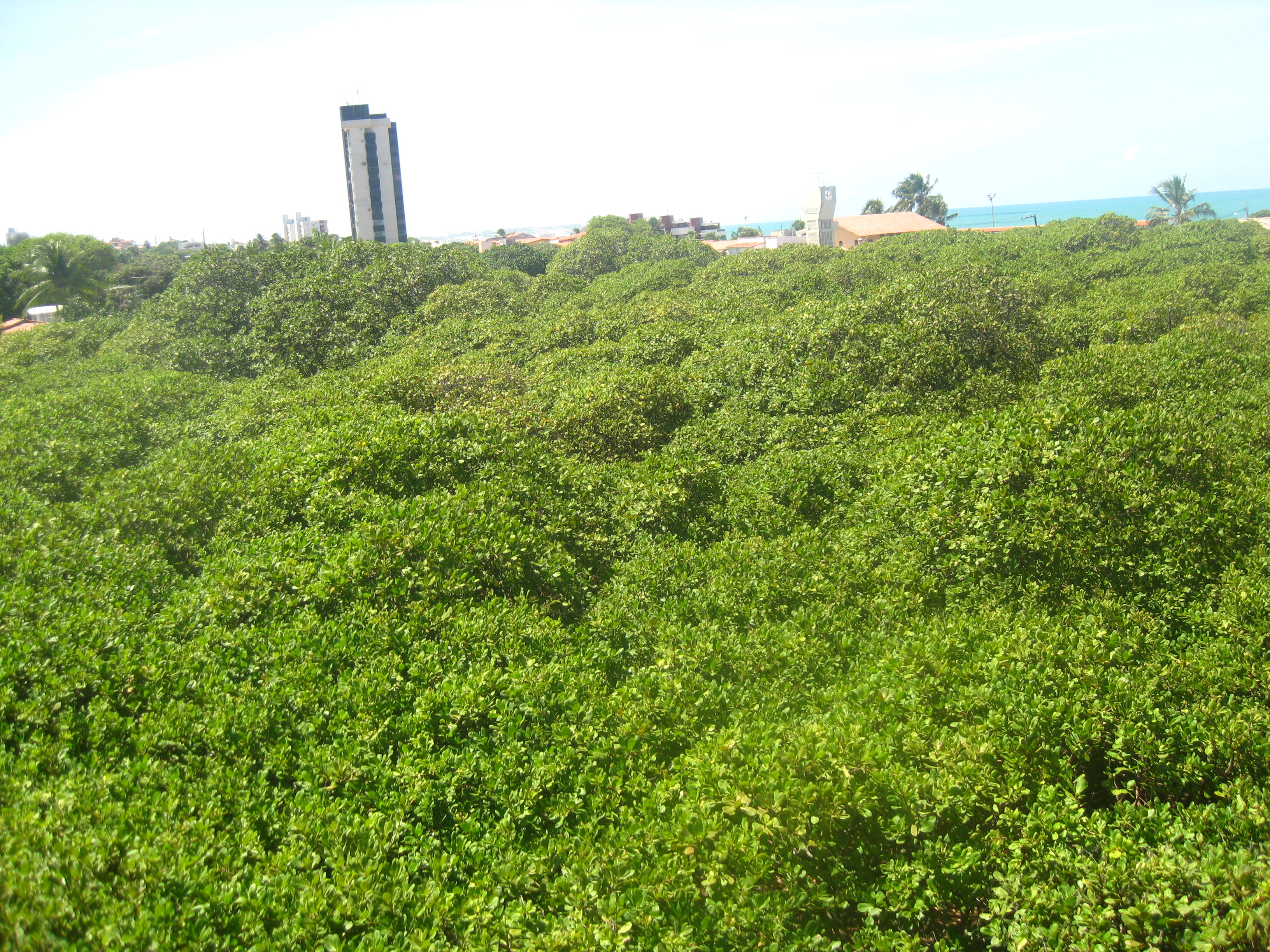 O Maior Cajuero do Mundo, or The Biggest Cashew Tree in the World, Natal. What a tourist attraction! A tree that covers more than a New York City block! Planted in 1888, the largest cashew tree in the world got to be so big due to genetic anomalies. Instead of growing vertically, the branches grow sideways and then down into the ground, spreading out without end. The tree has become a tourist attraction that costs R$2 to enter. This for me is the definition of quirkyness–instead of becoming a source of shame the tree’s genetic oddness is celebrated! The town has turned the tree into a Lonely Planet- mention-worthy tourist attraction. I went to see the tree with Brazilian guys, an Israeli, and an Argentinean from my hostel and they thought it was hilarious that I thought the Maior Cajeiro do Mundo was one of the best things I had seen in Brazil. Well, it was! I loved it. 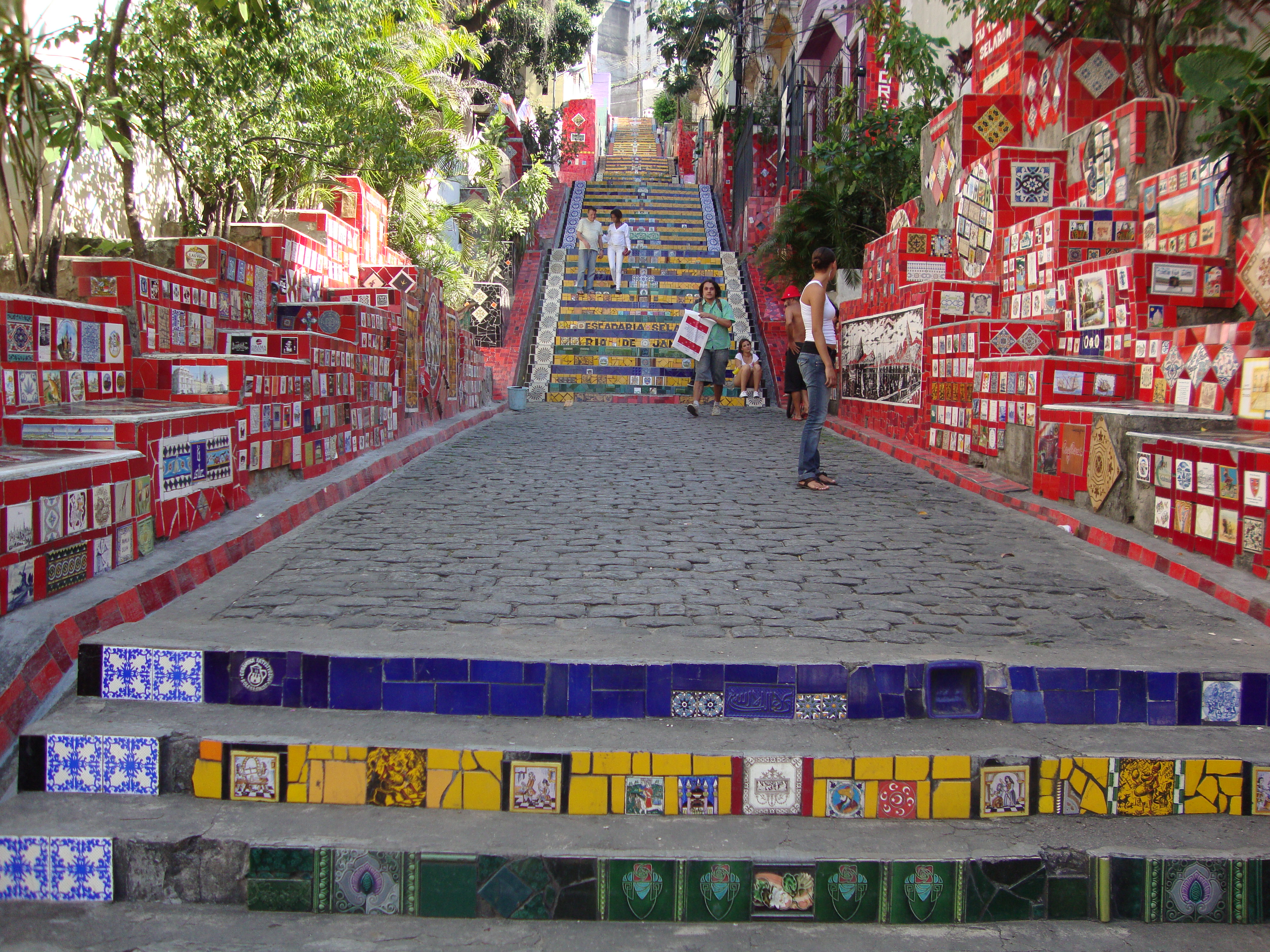 Escada de Selaron, or, the Selaron Steps. Rio de Janeiro. Santa Teresa is the most poetic neighborhood I have ever known, and it’s where I spent most of my time in Rio. Santa Teresa sits on top of a hill with dozens of hidden staircases that descend into various neighborhoods at its feet. Some of the staircases have been turned into canvases for art, and none more than the Selaron Steps, which lead into Lapa. A Chilean artist Selaron started an art project as an ode to Brazil. Now that the steps are well known he collects tiles from tourists who bring them from their own cities and he is ever adding to the collection. There’s a small gallery tucked inside the wall alongside the steps where he sells photos and art. The steps are his love note to Brazil, and he says he will work on it until the day he dies. Descending the steps from Santa Teresa into Lapa is a glorious way to enter the city.

I’d love to hear about other odd, creative, individual projects in Brazil, or really, anywhere in the world. Any ideas? Please suggest them in the comments.

Words from a foreign language reveal how people from another culture think, and that can be endlessly fun. This week one word kept popping up in conversation in Rio. It’s a particularly Carioca word called “Malandro.”

The first time that “Malandro” came up I was waiting in a bookstore in Leblon, the most chi-chi part of Rio, with a new friend I had just met. We were waiting for someone I had made plans with and he texted me to say he was almost there, “one minute.” I explained this to the first guy and he reacted with some doubt and asked if I knew the word “Malandro.” No, I said. He told me “Malandro” means a guy who has more than one woman but doesn’t let any of them know, a slippery kind of person. Oh. That night I was looking at Lonely Planet Brazil and noticed the use of “Malandro” in a box of text describing Lapa, the historic center of samba in Rio. A “malandro,” according to Lonely Planet, was a “con artist.”

The next day, a young Lithuanian guy who has lived in Brazil five years and who works at the guesthouse where I am staying asked me if I knew what a “Malandro” is. Amazed, I told him the word had already come up twice in 24 hours. He proceeded to tell me that a “malandro” is like an urban surfer, a guy who doesn’t work but manages to get by somehow and that everyone wants to be a malandro. He’s the cool guy every other guy would like to be. Can a woman be a “malandra”? Oh, definitely not, according to Tita.

That night I asked a few more people about “Malandro.” My friend Roberto told me that a “malandro” was a historical character of Lapa that can now only be found in escolas de samba, samba schools–dapper men who dress all in white. My friend Marcello described a “malandro” as a clever, fast-thinking person who can talk his way out of any situation. He thought “malandras” exist, they’re just fewer in number. Josemando thought a “malandro” is someone that takes advantage of others.

No one seems to really self-identify as a “malandro.” Tita, the outsider, is the only one who really glorified them. Roberto and I joked about going malandro-spotting in a samba school–it would be fun to find some malandros and take pictures.

The word begins with “mal” so I assume that a “malandro” is a shady character but most people say that they’re more complicated than “bad.” That’s one thing I am noticing about Rio. Everything has two sides, everything has a double meaning. At times I wonder if I should be leaving and spending time in another country in order to learn more, be exposed to another culture. But spending more time in one place means that I get to learn more deeply about cultural intricacies like these. And I am still waiting to meet an official “malandro.” Stay tuned for a picture if I ever find one.