Hi! I’m Sasha Cagen, a women’s empowerment coach with a focus on helping women 40+, author of the cult hit book Quirkyalone: A Manifesto for Uncompromising Romantics (Harper SanFrancisco) and To-Do List: From Buying Milk to Finding a Soul Mate, What Our Lists Reveal About Us (Simon & Schuster), and a tango-obsessed world traveler.

I’m current at work on a memoir called Wet, and I can’t wait to invite you to dive in with me when this book, a story of healing, comes out.

My books and coaching work have been featured in 100+ media outlets worldwide, from NPR and the New York Times to the Guardian and CNN.

My current mission is to help women reconnect with their worth by reconnecting with their bodies from the inside out. I can even help you make decisions by consulting your pussy 😉 Yes I did just write that sentence in my bio!

The best way to stay in touch is to sign up for my newsletter the Sasha Cagen Weeklyish. My 5000+ subscribers often tell me that I have an uncanny way of sending them just what they needed to hear at the moment. 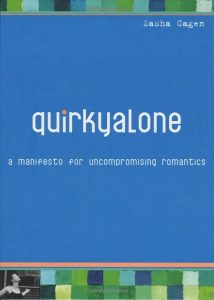 The book also made a splash in Brazil, Argentina, Colombia, Denmark, Italy, and Poland, among other far-off places.

Quirkyalone was one of the first books to cast singlehood in a new light back in 2004, and provided a much-needed sense of validation to many who spents years single in search of love, or simply living their lives fully when not partnered. Tens of thousands of people identified with that book and concept, joining online communities from Facebook to Second Life to Quirkyalone.net. 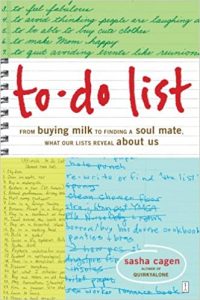 My second book To-Do List: From Buying Milk to Finding a Soul Mate, What Our Lists Reveal About Us (Simon & Schuster) shines a light on our lists as a window into our souls. The book was the outgrowth of a dearly beloved magazine that I published between the years of 2000 and 2003, also called To-Do List.  Watch this talk I did at Google about my original research into lists and listmakers.

Get to know me + my work through these podcasts

The Question of Motherhood (and Living Differently) on Maybe Someday

Why Wet and Not Juicy, about my upcoming memoir on healing through sensuality, on Fuck Dating

In these videos you can see me interact with Anderson Cooper on CNN–and my fabulous coaching clients. From Quirkyalone to Pussywalking…it’s all here.

Where in the world is Sasha?